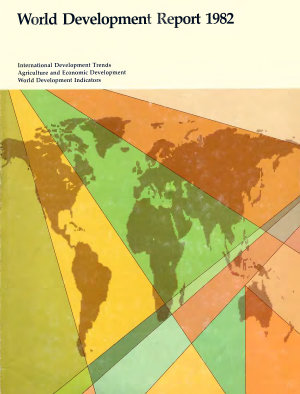 This report reviews development prospects in the international economy and supplements the extensive discussion of adjustment issues in the 1981 World Development Report. It finds that, although international prospects have worsened over the past year, during the remainder of the decade the middle-income countries should be able to continue narrowing the income gap between themselves and the industrial countries. The prospects for many of the low-income countries, however, remain a matter of grave concern. The report concentrates on agriculture, which remains the chief source of income for close to two-thirds of the population in developing countries and for the vast majority of the world's poor. Informing the discussion is the experience gained by the World Bank in helping to finance some 800 agricultural and rural development projects in more than 70 countries - experience supported by its broad, intensive programs of economic, scientific, and social research. Numerous tables and multicolor maps and graphics supplement the main body of the report; case studies are interspersed to provide analyses directly related to the substance of the text. The final portion of the report comprises world development indicators, 25 two-page tables containing economic and social profiles of more than 120 countries.

Long-term needs and sustained effort are underlying themes in this year's report. As with most of its predecessors, it is divided into two parts. The first look

The world's demand for food is expected to double within the next 50 years, while the natural resources that sustain agriculture will become increasingly scarce

This is the ninth in an annual series assessing development issues. The world economy is entering its fourth year of growth since the recession of 1982. Yet the

This report is the sixth in an annual series assessing development issues. It reviews recent trends in the international economy and their implications for the

This edition of the Annual World Bank Conference on Development Economics presents selected papers from the ABCDE Meetings, held May 29-30, 2006, in Tokyo, Japa

Africa, the World Bank, and the IMF

The Politics of Global Competitiveness

This book documents the recent developments of what Marx called the 'general law of social production', and the leading roles of the Organisation for Economic C

This book examines postcolonial strategies for economic development in Africa from the 1960s to the present day.