Whispers of the Skyborne 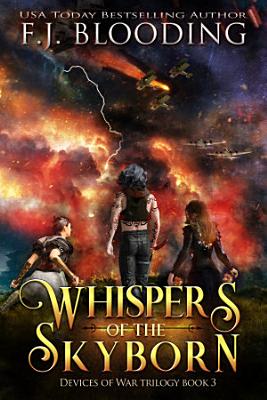 Nix isn't our biggest foe. And now, we have a name. ​ We have a new government, and for a little bit, I can disappear and rebuild. I’m recovering after the events of the Sky Games. I have a new design for my ships. Faster. Larger. More versatile. ​ Built for war. ​ But our enemy isn’t who we thought they are. It isn’t Nix and her Hands of Tarot. She’s in custody, under my control. But the war is still ongoing. Factions of the tribal Great Families have broken off in search of the only metal deposits left on our moon, and they don’t care who gets in their way. They’re the pure bloods with the greatest Marks. ​ The Marks of power we hold such pride in will be our undoing. They’re not a gift to be praised. They’re an invasion, the first wave. The Skyborne are desperate for supplies to rebuild their starships. Our Marks are their only way of controlling us to provide for them. ​ But when they have what they need, it may be the end of everything we know.

Whispers of the Skyborne

Nix isn't our biggest foe. And now, we have a name. ​ We have a new government, and for a little bit, I can disappear and rebuild. I’m recovering after the

She thought she had me. She was wrong. ​ I almost brought down Sky City, but now I’m in the hands of the enemy. Again. This time, it’s different. There’

Witches of the West

The Whiskeys are taking the battle to Portland and setting up shop in Merry Eastwood’s backyard. ​ They’re not alone. With the support and backing of the

Whiskey On the Rocks

The Whiskeys are growing in power, and the arrival of the ancients aren’t helping anything. Paige is now eight months pregnant with two ancients, and has just

Paige and Dexx are leading paranormals to freedom as carefully and quickly as they can. But Wynonna Hunt, a karmic witch in New Orleans, is after a demon, Valfi

Dexx has overcome many things in his time as a shifter. A rogue angel, a deranged shifter witch, even the most deadly demon Paige has ever come across. Cardinal

Eye of the Saber

Dexx has his alpha back and he's using it to protect his family - all of them. Dexx is finally back with his family and now they're in the greatest danger they'

The Whiskeys are growing in power, and they have no idea why. ​ Paige Whiskey is now the unofficial liaison between the Elder Council and the paranormal commu

Put a shapeshifting demon hunter in charge of policing paranormals. That's a great idea. When Dexx Colt followed Paige Whiskey to Oregon and then helped her set

One threat hangs over Paige's head. Merry Eastwood is in Texas. After breaking the treaty between the shifters and the witches—in order to save the shifters,