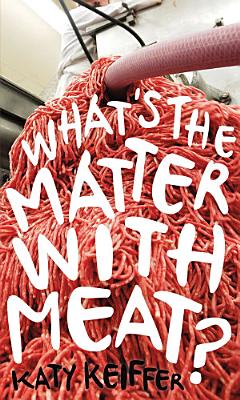 It’s been 111 years since the publication of The Jungle, Upton Sinclair’s groundbreaking book on the cattle industry. Though improvements in animal welfare have been made since then, the industry has evolved to include issues Sinclair could never have foreseen. In What’s the Matter with Meat, Katy Keiffer leads readers though a crash course on how this powerful multinational business has been able to generate such a bountiful supply of absurdly cheap animal proteins. What’s the Matter with Meat? explores everything from labor issues to genetic manipulation to animal welfare to environmental degradation, illustrating just how the industrial model for meat production conjures up huge quantities of cheap meat even as it shifts many of the real costs onto the taxpayer. She describes practices few of us know about, such as land grabs in which predator companies acquire property in foreign countries for meat production, often driving out local farmers. She shows how industry consolidation entrenches cost-effective but harmful practices, creating monopolies that force competitors out of business, drive down labor costs, erode workers’ rights, and exert extraordinary power over nearby communities. Keiffer demonstrates with irrefutable force that the current model for meat production—adopted worldwide—is simply not sustainable and will soon exhaust the planet’s resources. A hard-hitting critique of the meat industry and its harmful effects, this book shows us just how important it is to care about where our food comes from, to support alternative production systems, and to stop those practices that are ruining our planet in the service of the burger and the nugget.

It’s been 111 years since the publication of The Jungle, Upton Sinclair’s groundbreaking book on the cattle industry. Though improvements in animal welfare

Food: Studies in administration and control

The definitive, stand-alone companion book to the acclaimed documentary—now with 50 plant-based recipes and full-color photos to help you start changing your

Investigation Relative to Wages and Prices of Commodities

The Problem of Dark-Cutting in Beef

A critique of the meat industry and its harmful effects.