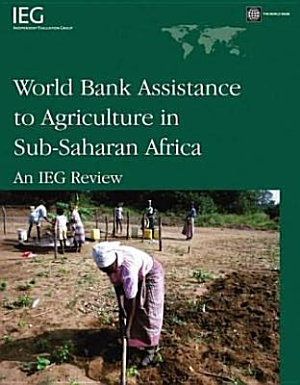 Sub-Saharan Africa is a critical development priority-it has some of the world's poorest countries and during the past two decades the number of poor in the Region has doubled, to 300 million-more than 40 percent of the Region's population. Africa remains behind on most of the Millennium Development Goals (MDGs) and is unlikely to reach them by 2015. With some of the world's poorest countries, Africa is a development priority for the donor community. A major drag on Africa's development is the underperformance of the critical agriculture sector, which has been neglected both by donors and governments over the past two decades. The sector faces a variety of constraints that are particular to agriculture in Africa and make its development a complex challenge. Poor governance and conflict in several countries further complicate matters. IEG has assessed the development effectiveness of World Bank assistance in addressing constraints to agricultural development in Africa over the period of fiscal 1991-2006.

This book is open access under a CC BY 4.0 license. This book presents methods to evaluate sustainable development using economic tools. The focus on sustainabl

The Law and Economics of Globalisation

The diversity of author backgrounds, coupled an assortment of provocative insights, makes this book a useful tool for delving into the meat of globalization, pr

Equal access to education is a basic human right. But in many countries gaps in education between various groups are staggering. An education Gini index -- a ne

What is life if not for its lessons? Every little nook we visit, every coexisting soul we meet, every brick in history we touch adds a new dimension to us in th

In his foreword, the president of the World Bank, James D. Wolfensohn, states plainly and precisely the rationale for this volume. "Evaluation is a central aspe

Imports and Growth in Africa

The effectiveness and efficiency of a country's public sector is vital to the success of development activities, including those the World Bank supports. Sound