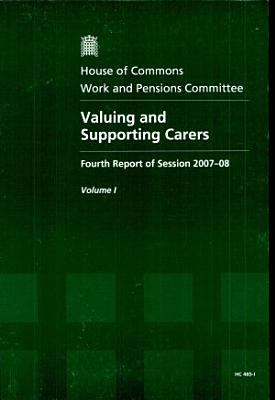 This report, (HCP 485-I, ISBN 9780215523488), from the Work and Pensions Committee, is entitled "Valuing and Supporting Carers". It examines the issues surrounding the role of carers in society and what the Government needs to do to support them. It is estimated that the public purse saves £87bn each year, from the unpaid support carers provide. Further, with the increase in population and better healthcare increasing life expectancy, there will be greater demand on such care and support. The Committee believes it is essential that carers of working age are able to sustain their ability to remain in work and are provided help in returning to work. In June 2008, the Government published its new 10 year vision for carers "Carers at the Heart of the 21st Century Families and Communities" (http://www.dh.gov.uk/en/publicationsandstatistics/publications/publicationspolicyandguidance/DH_085345?IdcService=GET_FILE&dID=166685&Rendition=Web). The publication set out a number of commitments, including: the provision of information and advice; breaks provision for carers; improved support from the NHS; support to help carers better combine work and care. The Committee though expresses disappointment that the issue of benefits for carers was not directly addressed in the Carers Strategy and has only been identified as a long term priority from 2011 onwards. The Committee states that the current system of benefits for carers is outdated and recommends the introduction of two distinctive tiers of support for carers, offering: (i) income replacement support for carers unable to work, or working only part-time; (ii) compensation for additional costs of caring for all carers intensive caring roles. The financial pressures on carers arise from additional costs of caring and from reduced working hours, moving into lower paid work, or giving up work. One of the major reasons that carers struggle to remain in work is because of a lack of affordable, reliable and flexible care services. Carers often lose touch with the work environment and the Committee believes that where people have been caring for someone over a long period of time, they require a tailored support to re-enter employment, supported by advisers. The Committee believes that a joined up cross-governmental approach is required to ensure that carers are supported in the wider social care system. For Volume 2 of this report, oral and written evidence, see (ISBN 9780215523495).

This report, (HCP 485-I, ISBN 9780215523488), from the Work and Pensions Committee, is entitled "Valuing and Supporting Carers". It examines the issues surround

The level of pensioner poverty has declined markedly since 1997. However, there are still 2 million pensioners in poverty and 1.1 million who live on below 50%

Care and Support Rights After Neoliberalism

This book offers an approach to care and support policy prioritizing gender equality, disability human rights and dignity for all.

This White Paper follows the consultation paper "No one written off: reforming welfare to reward responsibility" (Cm. 7363, ISBN 9780101736329) which was itself

The Committee welcomes the Government's intentions to simplify and streamline legislation on discrimination into one single Equality Bill. But it believes that

As the state withdraws from welfare provision, the mixed economy of welfare – involving private, voluntary and informal sectors – has become ever more impor

Caring and the Law

'Caring and the Law' considers the law's response to caring. It explores how care is valued and recognised, how it is regulated and restricted and how the value

The political and economic landscape of UK social security provision has changed significantly since the 2008 financial crisis. This fully revised, restructured