Linking nutrition security and agrobiodiversity: the importance of traditional vegetables for nutritional health of women in rural Tanzania 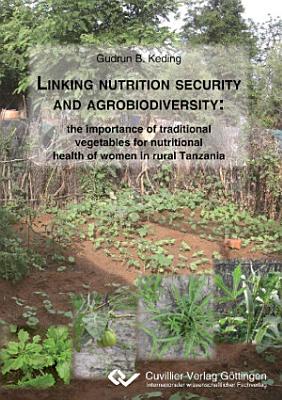 This cross-sectional sequential study investigated the link between vegetable diversity available (“production”) and dietary diversity of women (“consumption”) in three different districts of rural Tanzania. Furthermore, the relationship between the nutritional health status of participants and cropping and dietary diversity was analysed. The study was carried out during three different seasons within one year (2006/2007) in 18 villages of three districts in north-eastern and central Tanzania including 252 women. The survey included an individual interview on vegetable production, food consumption (i.a. 24h-recall, 7drecall on vegetables) and nutritional knowledge, and the measurement of body mass index (BMI), haemoglobin (Hb) for iron status and different parameters for vitamin A status. Besides studying single nutrients, food groups and health problems, also a more holistic view was taken on dietary diversity/food variety and dietary patterns and their relationships with nutritional status and vegetable production. Relationships were investigated both through bivariate correlations and multiple regression analysis; dietary diversity and food variety scores were calculated and dietary patterns were generated through principal component analysis (PCA) as well as cluster analysis. Regarding the link between production and consumption, there was a clear relationship between vegetable diversity produced and diversity consumed, while this was not so clear between production and consumption quantity, except for single seasons. Influencing factors on consumed vegetable quantity were suggested to be seasonality; the purchase of additional vegetables (especially exotic) next to home-grown ones; and knowledge, attitudes and preferences of women regarding vegetable consumption. When analysing food patterns, no direct association between diversity of vegetable cropping and vegetable consumption was established. Yet, for the study population in Tanzania it was found that food consumption was (still) influenced by local production and that, therefore, food consumption issues should always integrate existing food production and vice versa. The link established between food consumption and nutritional health data of the present study showed that the obesity epidemic is on the rise, even in rural, poor and underdeveloped regions of Tanzania. Furthermore, it was found that a high dietary diversity is not per se a guarantee for a healthy diet, yet, food types and food groups that contribute to a high diversity are decisive. A direct link between production and nutritional health could only partly be shown. Obviously, the focus on vegetable production seems to be not sufficient, but overall food production needs to be taken into account. Further recommendations for future research are, i.a., to investigate the influence of exotic vegetables and, generally, exotic foods in production and consumption on nutritional health; to enhance dietary diversity scores as a tool for assessing dietary diversity together with dietary quality; to eleborate dietary guidelines for Tanzania, preferably district- or area-wise; to investigate the nutrition transition in Tanzania especially in rural areas with a focus on the nutritional knowledge of people, their attitudes, preferences (e.g. taste) and behaviour

Linking nutrition security and agrobiodiversity: the importance of traditional vegetables for nutritional health of women in rural Tanzania

Encyclopedia of Food and Health

The Encyclopedia of Food and Health provides users with a solid bridge of current and accurate information spanning food production and processing, from distrib

Nutrition and the Cancer Patient

This comprehensive reference book provides both background information and practical, clinical advice on all areas of nutrition for the cancer patient at all st

Recent research findings on the impact of nutrition on telomere length is unlocking the potential to combat premature aging at the cellular level. We have learn