Toward "thorough, Accurate, and Reliable" 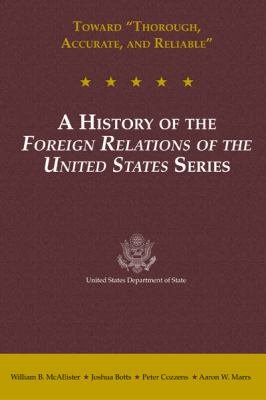 Toward "Thorough, Accurate, and Reliable" explores the evolution of the Foreign Relations of the United States documentary history series from its antecedents in the early republic through the early 21st century implementation of its current mandate, the 1991 Foreign Relations statute. This book traces how policymakers and an expanding array of stakeholders translated values like "security," "legitimacy," and "transparency" into practice as they debated how to balance the government's obligation to protect sensitive information with its commitment to openness. Determining the "people's right to know" has fueled lively discussion for over two centuries, and this work provides important, historically informed perspectives valuable to policymakers and engaged citizens as that conversation continues. Policymakers, citizens, especially political science researchers, political scientists, academic, high school, public librarians and students performing research for foreign policy issues will be most interested in this volume. Other related products: Available print volumes of the Foreign Relations of the United States (FRUS) series can be found here: https://bookstore.gpo.gov/catalog/international-foreign-affairs/foreign-relations-united-states-series-frus

Toward "thorough, Accurate, and Reliable"

Toward "Thorough, Accurate, and Reliable" explores the evolution of the Foreign Relations of the United States documentary history series from its antecedents i

Bringing together experts from history, international relations and the social sciences, United States Relations with China and Iran examines the past, present

Is the government too secret or not secret enough? Why is there simultaneously too much government secrecy and a seemingly endless procession of government leak

A recent coinage within international relations, “nation branding” designates the process of highlighting a country’s positive characteristics for promoti

The study of legal history has a broad application that extends well beyond the interests of legal historians. An attorney arguing a case today may need to cite

The Ghosts of Langley

"The Ghosts of Langley offers a detail-rich, often relentless litany of CIA scandals and mini-scandals. . . [and a] prayer that the CIA learn from and publicly

Ever since the nation's most important secret meeting--the Constitutional Convention--presidents have struggled to balance open, accountable government with nec

THE RESEARCH WRITER helps students transition from writing the research paper to doing research writing, from reporting information to working with ideas. The s