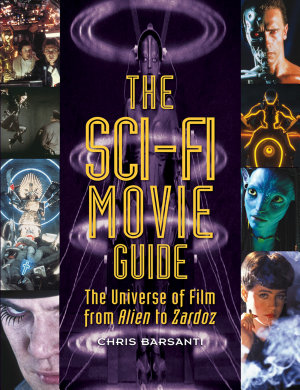 Once upon a time, science fiction was only in the future. It was the stuff of drive-ins and cheap double-bills. Then, with the ever-increasing rush of new, society-altering technologies, science fiction pushed its way to the present, and it busted out of the genre ghetto of science fiction and barged its way into the mainstream. What used to be mere fantasy (trips to the moon? Wristwatch radios? Supercomputers capable of learning?) are now everyday reality. Whether nostalgic for the future or fast-forwarding to the present, The Sci-Fi Movie Guide: The Universe of Film from Alien to Zardoz covers the broad and widening range of science-fiction movies. From the trashy to the epic, from the classics to today's blockbusters, this cinefile’s guidebook reviews nearly 1,000 of the biggest, baddest, and brightest from every age and genre of cinematic and TV science fiction. You’ll find more than just Star Wars, Star Trek, and Transformers, with reviews on many overlooked and under-appreciated gems and genres, such as ... • Monsters! Pacific Rim, Godzilla, The Thing, Creature from the Black Lagoon • Superheroes: Thor, Iron Man, X-Men, The Amazing Spider-man, Superman • Avant-garde masterpieces: Solaris, 2001, Brazil • and many, many more categories and movies!!