The Roots of Rural Capitalism 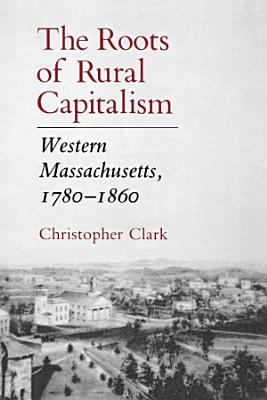 Between the late colonial period and the Civil War, the countryside of the American northeast was largely transformed. Rural New England changed from a society of independent farmers relatively isolated from international markets into a capitalist economy closely linked to the national market, an economy in which much farming and manufacturing output was produced by wage labor. Using the Connecticut Valley as an example, The Roots of Rural Capitalism demonstrates how this important change came about. Christopher Clark joins the active debate on the "transition to capitalism" with a fresh interpretation that integrates the insights of previous studies with the results of his detailed research. Largely rejecting the assumption of recent scholars that economic change can be explained principally in terms of markets, he constructs a broader social history of the rural economy and traces the complex interactions of social structure, household strategies, gender relations, and cultural values that propelled the countryside from one economic system to another. Above all, he shows that people of rural Massachusetts were not passive victims of changes forced upon them, but actively created a new economic world as they tried to secure their livelihoods under changing demographic and economic circumstances. The emergence of rural capitalism, Clark maintains, was not the result of a single "transition"; rather, it was an accretion of new institutions and practices that occurred over two generations, and in two broad chronological phases. It is his singular contribution to demonstrate the coexistence of a family-based household economy (persisting well into the nineteenth century) and the market-oriented system of production and exchange that is generally held to have emerged full-blown by the eighteenth century. He is adept at describing the clash of values sustaining both economies, and the ways in which the rural household-based economy, through a process he calls "involution," ultimately gave way to a new order. His analysis of the distinctive role of rural women in this transition constitutes a strong new element in the study of gender as a factor in the economic, social, and cultural shifts of the period. Sophisticated in argument and engaging in presentation, this book will be recognized as a major contribution to the history of capitalism and society in nineteenth-century America.

The Roots of Rural Capitalism

Between the late colonial period and the Civil War, the countryside of the American northeast was largely transformed. Rural New England changed from a society

The Limits of Rural Capitalism

Sylvester challenges the view in prairie historiography that agriculture had commercialized before the west was opened to settlement, and that ethnic communitie

Cultural Change and the Market Revolution in America, 1789-1860

In this exciting new work, Scott C. Martin brings together cutting-edge scholarship and articles from diverse sources to explore the cultural dimensions of the

Education and the Creation of Capital in the Early American Republic

This book argues that schools were a driving force in the formation of social, political, and financial capital during the market revolution and capitalist tran

The Origins of American Capitalism

The Agrarian Origins of American Capitalism

The Roots of American Industrialization

Looks at the rise of industrialization in the Eastern United States during the first half of the nineteenth century.

The Roots of American Individualism

The Market Revolution in America

This collection of essays aims to respond to Charles Sellers's The Market Revolution, reflecting upon the historiographic accomplishments initiated by his work,

In the unstable economy of the nineteenth-century, few Americans could feel secure. Paper money made values less tangible, while a series of financial manias, p