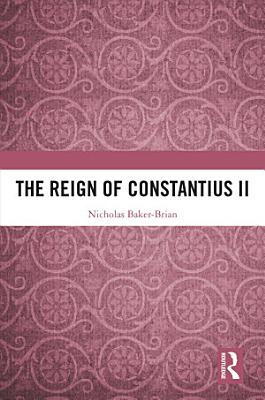 Constantius II, son of Constantine the Great, ruled the Roman Empire between 337 and 361 CE. Constantius’ reign is characterised by a series of political and cultural upheavals and is rightly viewed as a time of significant change in the history of the fourth century. Constantius initially shared power with his brothers, Constantine II and Constans, but this arrangement lasted a short period of time before Constantine II was killed in a contest over authority by Constans. Further threats to the stability of the empire arose with the usurpation of the ambitious Roman general Magnentius between 350 and 353, and additional episodes of imperial instability occurred as Constantius’ relations with his junior Caesars, Gallus and Julian, deteriorated, the latter to the point where civil war would have been on the cards once again if Constantius had not died on 3 November 361. This book examines the dynastic, political and cultural impact of Constantius' reign as a member of the Constantinian family on the later empire, first as a joint ruler with his brothers and then as sole Augustus. The chapters investigate the involvement of Constantius in the imperial, administrative, legal, religious and cultural life of the Roman Empire in the fourth century. Constantius’ handling of various threats to Roman hegemony such as the ambitions of the neighbouring Sasanian Empire, and his relationships with Gallus and with Julian are explored. The book’s analysis is guided by the epigraphic, iconographic, literary and legal evidence of the Roman and Byzantine periods but it is not a conventional imperial ‘biography’. Rather, it examines the figure of Constantius in light of the numerous historiographical issues surrounding his memorialisation in the historical and literary sources, for instance as ‘Arian’ tyrant or as internecine murderer. The over-arching aim is to investigate power in the post-Constantine period, and the way in which imperial and episcopal networks related to one another with the ambition of participating in the exercise of power. The Reign of Constantius II will appeal to those interested in the Later Roman Empire, the Constantinian imperial family, Roman-Sasanian relations, and the role of religion in shaping imperial dynamics with Christianity.

Constantius II, son of Constantine the Great, ruled the Roman Empire between 337 and 361 CE. Constantius’ reign is characterised by a series of political and

This book examines the dynastic context for Constantius IIâe(tm)s reign as a member of the Constantinian family, first as a joint ruler with his brothers and t

This edited collection focuses on the Roman empire during the period from AD 337 to 361. During this period the empire was ruled by three brothers: Constantine

Emperor and Senators in the Reign of Constantius II

Explores the political importance of senators for the maintenance of imperial rule under Constantine I and his son Constantius II.

Studies in the Reign of Constantius II

The Oxford Dictionary of Late Antiquity

The Oxford Dictionary of Late Antiquity is the first comprehensive reference book covering every aspect of history, culture, religion, and life in Europe, the M

In May 2015 an international conference organised by the University of Cyprus and the Cypriot Department of Antiquities was held in Nicosia - a conference, whic