The Making of Modern Children's Literature in Britain 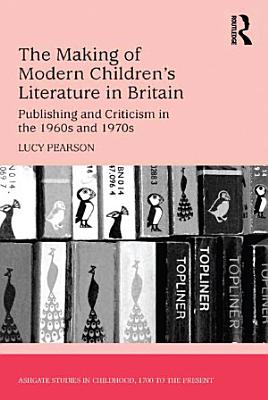 Lucy Pearson’s lively and engaging book examines British children’s literature during the period widely regarded as a ’second golden age’. Drawing extensively on archival material, Pearson investigates the practical and ideological factors that shaped ideas of ’good’ children’s literature in Britain, with particular attention to children’s book publishing. Pearson begins with a critical overview of the discourse surrounding children’s literature during the 1960s and 1970s, summarizing the main critical debates in the context of the broader social conversation that took place around children and childhood. The contributions of publishing houses, large and small, to changing ideas about children’s literature become apparent as Pearson explores the careers of two enormously influential children’s editors: Kaye Webb of Puffin Books and Aidan Chambers of Topliner Macmillan. Brilliant as an innovator of highly successful marketing strategies, Webb played a key role in defining what were, in her words, ’the best in children’s books’, while Chambers’ work as an editor and critic illustrates the pioneering nature of children's publishing during this period. Pearson shows that social investment was a central factor in the formation of this golden age, and identifies its legacies in the modern publishing industry, both positive and negative.

The Making of Modern Children's Literature in Britain

An established introductory textbook that provides students with a guide to developments in children's literature over time and across genres. This stimulating

This book provides scholars, both national and international, with a basis for advanced research in children’s literature in collections. Examining books for

'Postwar' is both a period and a state of mind, a sensibility comprised of hope, fear and fatigue in which British society and its writers paradoxically yearned

Exploring the ethical questions posed by, in, and about children’s literature, this collection examines the way texts intended for children raise questions of

Bringing together children’s literature scholars from China and the United States, this collection provides an introduction to the scope and goals of a field

Over the last 20 years, Jacqueline Wilson has published well over 100 titles and has become firmly established in the landscape of Children's Literature. She ha

Left Out presents an alternative and corrective history of writing for children in the first half of the twentieth century. Between 1910 and 1949 a number of Br

The astonishing success of J.K. Rowling and other contemporary children's authors has demonstrated how passionately children can commit to the books they love.