The Karma of Untruthfulness: v. 2 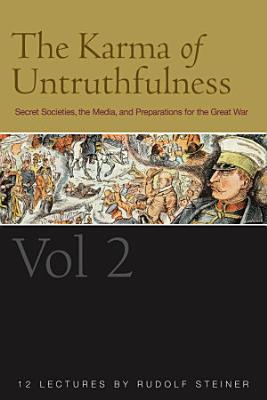 Although these lectures were given during 1916, they have much to teach us about the political spin, media distortions, propaganda and downright lies we encounter on a daily basis in public life. Rudolf Steiner's calm and methodological approach penetrates the smokescreen of accusations and counterclaims, of illusion and untruth, surrounding the Great War. Hiding behind this fog, and under the guise of outer events, he reveals the true spiritual struggle that is taking place. His words give a deeper understanding of the politics and world conflicts that confront us today through the filter of the media. In the midst of the turmoil of the First World War, Steiner speaks out courageously against the hatred and untruthfulness in the propaganda of the time. From his detailed research into the spiritual impulses of human evolution, he describes the dominant role secret brotherhoods played in the events culminating in the cataclysmic war, and warns that the retarding forces of nationalism must be overcome if Europe is to find its new destiny. He also emphasizes the urgent need for new social structures if further catastrophes are to be avoided. At a time when political events throughout the world are moving with breathless rapidity, the reader will find much in these lectures that will illuminate what lies behind the symptoms of our turbulent times. This new edition, reproduced in a larger format, is put in a modern context and introduced by Terry Boardman.

The Karma of Untruthfulness: v. 2

Although these lectures were given during 1916, they have much to teach us about the political spin, media distortions, propaganda and downright lies we encount

The Karma of Untruthfulness

Here are amazing insights showing reincarnation to be deeply and powerfully revealed in the Bible's most fundamental aspects. How and why have these insights es

Spiritual Science in the 21st Century

With love, humour and brilliant insight, Ben-Aharon addresses some of the most critical questions of our age, ranging from artificial intelligence and global po

Michael and the Two-horned Beast

In our materialistic and skeptical age, it can be difficult to take seriously the existence of real spiritual beings. Nevertheless, countless individuals -- fro

In the age of the internet and the proliferation of 'conspiracy theories', the idea that secret groups are seeking to gain control over humanity is no longer un

Christ and the Spiritual World

Reassessing human history in relation to the cosmic-earthly events of Christ’s incarnation, Rudolf Steiner stresses the significance of both Gnostic spiritual

The Occult Truths of Myths and Legends

In this series of previously-untranslated lectures, Rudolf Steiner describes how myths and legends portray humanity’s most ancient evolutionary and spiritual