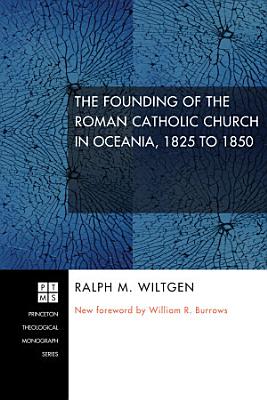 The Founding of the Roman Catholic Church in Oceania, 1825-1850 is the first detailed and documentary history of the seminal period of Roman Catholic missionary activity. Beginning with the founding of the Prefecture Apostolic of the Sandwich Islands in 1825 there was continued development in Australia, New Zealand, Melanesia, Micronesia, and Polynesia for the next quarter century. By 1850 this vast area of the South Seas could boast of one archdiocese, eight dioceses, and eight vicariates apostolic. This lively, dramatic narrative is told largely through the words of the participants drawn from diaries, documents, and letters found in the archives of the Vatican and several religious orders. The comprehensive tale ranges from the politics of the Vatican to sufferings on outpost islands. The focus of attention shifts from Rome to Paris, Valparaiso, Sydney, Honiara, Auckland, and many other places, in a study of men and institutions, faith and emotion, rivalries and confusions, murder and annexation, God and mammon. Originally published in 1979, this important historical study had been out of print and virtually unavailable for many years until this new edition was completed.

The Founding of the Roman Catholic Church in Oceania, 1825-1850 is the first detailed and documentary history of the seminal period of Roman Catholic missionary

The Founding of the Roman Catholic Church in Melanesia and Micronesia, 1850-1875

The Founding of the Roman Catholic Church in Melanesia and Micronesia, 1850 to 1875 is the result of Father Ralph Wiltgen's years of archival work in Rome and a

Clear assessment of our needs in a global society, and sound creative solutions from an Oceanic perspective and beyond, form the subject matter of this book. He

The Blackwell Companion to Catholicism

The Blackwell Companion to Catholicism offers an extensive survey of the history, doctrine, practices, and global circumstances of Roman Catholicism, written by

Encyclopedia of Christianity in the Global South

This is the first scholarly treatment of nineteenth-century Christianity to discuss the subject in a global context. Part I analyses the responses of Catholic a

Australia's Empire is the first collaborative evaluation of Australia's imperial experience in more than a generation. Bringing together poltical, cultural, and

The Routledge Companion to the Christian Church

The nature and story of the Christian church is immensely important to theology students and scholars alike. Written by an international team of distinguished s

The Story of Suzanne Aubert

Reissue of bestselling biography. Published by Bridget Williams Books. This beautifully written story of a radical nun who founded a religious congretation sold