The Enemy in Our Hands 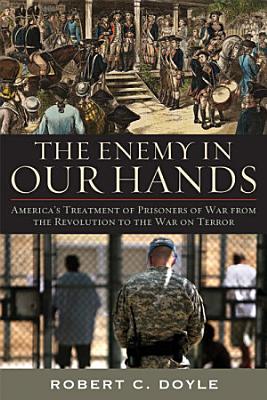 Revelations of abuse at Baghdad's Abu Ghraib prison and the U.S. detention camp at Guantánamo Bay had repercussions extending beyond the worldwide media scandal that ensued. The controversy surrounding photos and descriptions of inhumane treatment of enemy prisoners of war, or EPWs, from the war on terror marked a watershed momentin the study of modern warfare and the treatment of prisoners of war. Amid allegations of human rights violations and war crimes, one question stands out among the rest: Was the treatment of America's most recent prisoners of war an isolated event or part of a troubling and complex issue that is deeply rooted in our nation's military history?Military expert Robert C. Doyle's The Enemy in Our Hands: America's Treatment of Prisoners of War from the Revolution to the War on Terror draws from diverse sources to answer this question. Historical as well as timely in its content, this work examines America's major wars and past conflicts -- among them, the American Revolution, the Civil War, World Wars I and II, and Vietnam -- to provide understanding of the UnitedStates' treatment of military and civilian prisoners. The Enemy in Our Hands offers a new perspective of U.S. military history on the subject of EPWs and suggests that the tactics employed to manage prisoners of war are unique and disparate from one conflict tothe next. In addition to other vital information, Doyle provides a cultural analysis and exploration of U.S. adherence to international standards of conduct, including the 1929 Geneva Convention in each war. Although wars are not won or lost on the basis of how EPWs are treated, the treatment of prisoners is one of the measures by which history's conquerors are judged.

The Enemy in Our Hands

Revelations of abuse at Baghdad's Abu Ghraib prison and the U.S. detention camp at Guantánamo Bay had repercussions extending beyond the worldwide media scanda

God's Word in Our Hands

In this follow-up book to the landmark From the Mind of God to the Mind of Man, the Text and Translation Committee discusses the historical preservation of the

Correspondence Relative to the Affairs of Hungary 1847-1849. Presented to Both Hozses of Parliament by Command of Her Majesty August 15, 1850

The War of the Rebellion

The Waffen-SS in Allied Hands Volume One

The Waffen-SS are commonly regarded as the elite of Germany’s armed forces during World War II. They gained much of this reputation while fighting on the East

If you were a Confederate prisoner during the Civil War, you might have ended up in this infamous military prison in Chicago. More Confederate soldiers died in