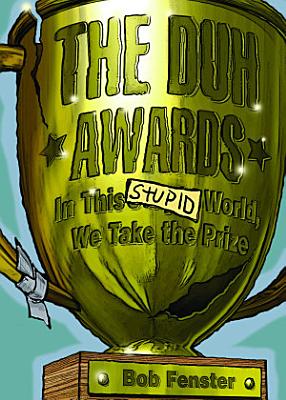 From the genius of funnyman Bob Fenster, who brought you Duh!, They Did What!?, and Well, Duh!, comes another in real-life idiocy. The Duh Awards honors the intellectually challenged and utterly inept. From historical explorers to politicians to celebrities to everyday people, no one is spared from lampoon. Ever notice there seems to be an award show for just about everything? And that everyone who wins is rich, beautiful, and brilliant? Good-looking, intelligent winners are everywhere. The Duh Awards is for the rest of us. These awards are handed out to the not-so-smart, the underworked, the overpaid, the wacky, the weird, and the downright stupid. And it's about time! Chapters include such ridiculousness as: Boss of the Year and Other Slave Driver Awards; Champion Scoffers, Scorners, Insulters, and Other All-Star Wise Guys; and Only in Hollywood-The Anti-Oscars. Here are just a excerpts from this hilarious book: The Know-a-Little, Talk-a-Lot Society presents the Anti-Expert Awards: In 1931 President Herbert Hoover somehow missed the impact of the Great Depression when he offered this solution: "If someone could get off a good joke every ten days, I think our troubles would be over." Winning Mind Games: All-Star Shockers, Psych-Outs, and Gross Champs: During the halftime show of the 2004 Super Bowl, singer Justin Timberlake removed part of singer Janet Jackson's shirt to reveal one of her star breasts on national TV. This upset viewers who had tuned in to watch rapper Nelly grab his crotch. The Spin Awards for Fooling Most of the People Enough of the Time: In 2003 Secretary of Defense Donald Rumsfeld told the press: "As we know, there are known knowns; there are things we know we know. We also know there are known unknowns; that is to say we know there are some things we do not know. But there are also unknown unknowns--the ones we don't know we don't know." The Duh Awards celebrates the moments that some would rather we forget.

From the genius of funnyman Bob Fenster, who brought you Duh!, They Did What!?, and Well, Duh!, comes another in real-life idiocy. The Duh Awards honors the int

Telling hundreds of true stories about the weird and wacky stuff that happens when people operate outside of the box, author Bob Fenster proves that life is fun

Truth, as any good reporter knows, is stranger than fiction. It's often funnier as well. Bob Fenster provides proof of that in his latest hilarious collection,

What we can learn about human nature from the informative, manipulative, confusing, and amusing messages at the bottom of the web. Online comment can be informa

Greatest Jokes of the Century

If you thought the first three were hilarious, this one will quadruple your pleasure. More fun and folly, jokes, and stories. Guaranteed to produce outrageous c

Urban life without urban nature is unthinkable today! This textbook on the Green City examines urban nature as an ideal, provider of services and conceptual urb

When physicians and nurses suffer from burnout, patients suffer as well. This book pinpoints the how and why and shows what healthcare providers and their organ