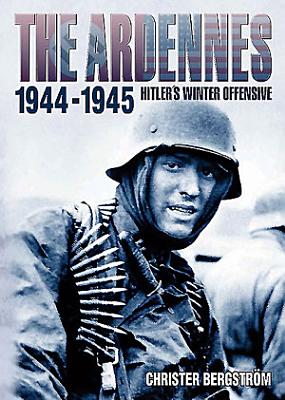 In December 1944, just as World War II appeared to be winding down, Hitler shocked the world with a powerful German counteroffensive that cracked the center of the American front. The attack came through the Ardennes, the hilly and forested area in eastern Belgium and Luxembourg that the Allies had considered a quiet sector. Instead, for the second time in the war, the Germans used it as a stealthy avenue of approach for their panzers. Much of U.S. First Army was overrun, and thousands of prisoners were taken as the Germans forged a 50-mile bulge into the Allied front. But in one small town, Bastogne, American paratroopers, together with remnants of tank units, offered dogged resistance. Meanwhile the rest of Eisenhowers broad front strategy came to a halt as Patton, from the south, and Hodges, from the north, converged on the enemy incursion. Yet it would take an epic, six-week-long winter battle, the bloodiest in the history of the U.S. Army, before the Germans were finally pushed back. Christer Bergström has interviewed veterans, gone through huge amounts of archive material, and performed on-the-spot research in the area. The result is a large amount of previously unpublished material and new findings, including reevaluations of tank and personnel casualties and the most accurate picture yet of what really transpired. The Ardennes Offensive has often been described from the American point of view; however, this balanced book devotes equal attention to the perspectives of both sides. With nearly 400 photos, numerous maps, and 32 superb color profiles of combat vehicles and aircraft, it provides perhaps the most comprehensive look at the battle yet published.

In December 1944, just as World War II appeared to be winding down, Hitler shocked the world with a powerful German counteroffensive that cracked the center of

When Christer Bergström published the first English edition of his ground-breaking mammoth work The Ardennes 1944-1945: Hitlers Winter Offensive in 2014, it hi

When Christer Bergstrom published the first English edition of his ground-breaking mammoth work The Ardennes 1944-1945: Hitlers Winter Offensive in 2014, it hit

Patton at the Battle of the Bulge

In Patton at the Battle of the Bulge, Army veteran and historian Leo Barron explores one of the most famous yet little-told clashes of WWII, a vitally important

Telling the harrowing stories of noncombatants caught up in the maelstrom of war, The Unknown Dead surveys this crucial battle and its consequences from an enti

The Americans from the Ardennes to VE Day

The third and final volume of the Authors Americans in North-west Europe series covers the historic period December 1944 to May 1945. Launched in December 194

The Battle of the Bulge

Fought during the frigid winter of 1944-45, the Battle of the Bulge still ranks as the single largest battle ever waged by the US Army. It was also a test: Coul