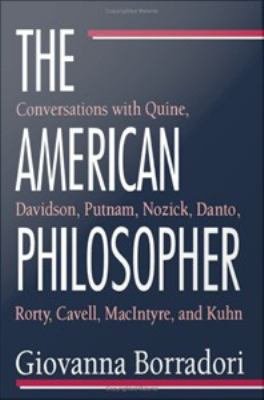 In this lively look at current debates in American philosophy, leading philosophers talk candidly about the changing character of their discipline. In the spirit of Emerson's The American Scholar, this book explores the identity of the American philosopher. Through informal conversations, the participants discuss the rise of post-analytic philosophy in America and its relations to European thought and to the American pragmatist tradition. They comment on their own intellectual development as well as each others' work, charting the course of American philosophy over the past few decades. Giovanna Borradori, in her substantial introduction, explains the history of the analytic movement in America and the home-grown reaction against it. In the late nineteenth and early twentieth centuries, American philosophy was a socially engaged interdisciplinary enterprise. In transcendentalism and pragmatism, then the dominant currents in American thought, philosophy was connected to history, psychology, and public issues. But in the 1930s, the imported European movement of logical positivism redefined philosophical discourse in terms of mathematical logic and theory of language. Under the influence of this analytic view, American philosophy became a professionalized discipline, divorced from public debate and intellectual history and antagonistic to the other, more humanistic tradition of continental thought. The American Philosopher explores the opposition between analytic and continental thought and shows how recent American work has begun to bridge the gap between the two traditions. Through a reexamination of pragmatism, and through an attempt to understand philosophy in a more hermeneutical way, the participants narrow the distance between America's distinctly scientific philosophy and Europe's more literary approach. Moving beyond classical analytic philosophy, the participants confront each other on a number of topics. The logico-linguistic orientations of Quine and Davidson come up against the more discursive, interdisciplinary agendas of Rorty, Putnam, and Cavell. Nozick's theory of pluralist anarchism goes face-to-face with the aesthetic neo-foundationalism of Danto. And Kuhn's hypothesis of paradigm shifts is measured against MacIntyre's ethics of "virtues." Borradori's conversations offer an unconventional portrait of the way philosophers think about their work; scholars and students will not be its only beneficiaries, so will everyone who wonders about the current state of American philosophy.

In this lively look at current debates in American philosophy, leading philosophers talk candidly about the changing character of their discipline. In the spiri

Transactions of the American Philosophical Society

Proceedings and Addresses of the American Philosophical Association

Inaugurates an 11-volume set covering the century decade by decade and concluding with a collection of historical essays in 20th century American philosophy. Sh

The American Evasion of Philosophy

Taking Emerson as his starting point, Cornel West’s basic task in this ambitious enterprise is to chart the emergence, development, decline, and recent resurg

This book brings together two seminal works by George Santayana, one of the most significant philosophers of the twentieth century: Character and Opinion in the

This book presents the first introduction to African American academic philosophers, exploring their concepts and ideas and revealing the critical part they hav