Exodus from the Alamo 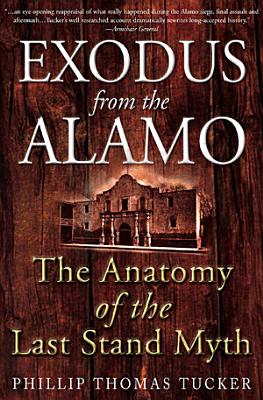 The award-winning historian provides a provocative new analysis of the Battle of the Alamo—including new information on the fate of Davy Crockett. Contrary to legend, we now know that the defenders of the Alamo during the Texan Revolution died in a merciless predawn attack by Mexican soldiers. With extensive research into recently discovered Mexican accounts, as well as forensic evidence, historian Phillip Tucker sheds new light on the famous battle, contending that the traditional myth is even more off-base than we thought. In a startling revelation, Tucker uncovers that the primary fights took place on the plain outside the fort. While a number of the Alamo’s defenders hung on inside, most died while attempting to escape. Capt. Dickinson, with cannon atop the chapel, fired repeatedly into the throng of enemy cavalry until he was finally cut down. The controversy surrounding Davy Crockett still remains, though the recently authenticated diary of the Mexican Col. José Enrique de la Peña offers evidence that he surrendered. Notoriously, Mexican Pres. Gen. Antonio López de Santa Anna burned the bodies of the Texans who had dared stand against him. As this book proves in thorough detail, the funeral pyres were well outside the fort—that is, where the two separate groups of escapees fell on the plain, rather than in the Alamo itself.

Exodus from the Alamo

The award-winning historian provides a provocative new analysis of the Battle of the Alamo—including new information on the fate of Davy Crockett. Contrary to

The Alamo often conjures up images of rugged frontiersmen, the likes of Davy Crockett and James Bowie, shoring up the defenses of the fort against the forces of

If everyone was killed inside the Alamo, how do we know what happened? This surprisingly simple question was the genesis for Todd Hansen's compendium of source

Emily D. West and the “Yellow Rose of Texas” Myth

For the first time, the true story of “The Yellow Rose of Texas” is told in full, revealing a host of new insights and perspectives on one of America’s mo

The Battle of the Alamo

Vivid storytelling brings American history to life and place readers in the shoes of twelve people who experienced an iconic moment of U.S. history - the Battle

Sam Houston and the Alamo Avengers

Eyewitness to the Alamo

Eyewitness to the Alamo is the actual account of the siege and Battle of the Alamo by those who were present during the attack. This book is the first complete

Alamo from A to Z, The

Profiles the defenders, enemy soldiers, and innocent bystanders and tells the story of the Texas defeat in alphabet format.

Original documents, time lines and letters present the facts about the battles, heroes and causes surrounding the fight for Texas independence. A host of fun an