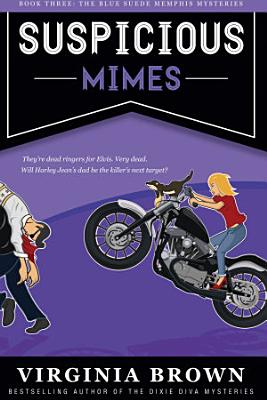 Maybe Harley Jean Davidson should have finished college, but at the time it hadn't seemed nearly as important as it did now. She should have stayed in corporate banking. She should have settled down with Mr. Right instead of dallying with Mr. Right Now--irresistible Memphis detective Mike Morgan. It was time to put her shallow youth behind her. She was closing in on thirty, entering the halls of maturity, and proving that she has a talent for catching bad guys. Things could be worse. Much worse. Her job as a Memphis tour guide is about to get even stranger than usual. "Hey," she called, "last stop for all Elvi. This is it, sir. Sir?" He didn't respond, just remained in his seat on the bus, staring out the window. Maybe he'd gotten cold feet about the Elvis contest. With a sigh, Harley walked to the back. "Hey, buddy," she said when she reached his seat, "we're here. Time to go on stage and sing your heart out. Knock 'em dead." When he still didn't respond, Harley put a hand on his shoulder to give him a slight shake. He slumped forward, his head hit the back of the seat in front of him, and she jumped into the aisle. The hilt of a knife protruded from his back. She froze. This couldn't be happening. Not to him, not to her, again. She leaned closer, and the rusty smell of blood made her stomach lurch. Backing slowly away, she fumbled at her waist for the cell phone that she now kept tethered to her with a chain, and hit speed dial. The police dispatcher answered quickly. "Nine-one-one?" Harley said in a voice that sounded a lot calmer than she felt. "We have another dead Elvis." Will her talent (jinx?) for stumbling into crime scenes eighty-six her relationship with Mike? Was he working up to a break up or just still upset about the dead Elvis in her van? Only one way to find out. "So," she said when she put the heated plate of fried rice and egg rolls in front of him, "is this a break up?" He gave her a startled look. "What are you talking about?" "Me finding bodies. You not liking that. Us. Maybe we need to talk about it." "Yeah. Well. I'm not really good at that kind of conversation." "Me either." She sat down in the chair opposite him, and Sam immediately jumped up on the cushioned arm to sniff her plate. He purred. Little beggar. She gave him a piece of rice and he gave her a horrified look. Then he leaped down to cross to Morgan, who had chicken fried rice. Morgan obliged the cat with a piece of chicken, and then looked over at Harley. "Maybe we just need a break from each other. Just for a couple weeks or a month. Something like that. Give us time to think about . . . things." Her throat got tight, but she nodded casually. "I think you're right. I don't want you to feel like I'm jeopardizing your job, and lately I can't seem to stop tripping over bodies. I don't know what it is. Some kind of murder magnet, I guess." One corner of his mouth tucked into a wry smile. "Any chance you can get rid of it?" Virginia Brown is the author of more than fifty novels, most recently the bestselling Dixie Diva Mysteries and the acclaimed mystery/drama, Dark River Road.

Maybe Harley Jean Davidson should have finished college, but at the time it hadn't seemed nearly as important as it did now. She should have stayed in corporate

Trinket and the Gang Will Stop At Nothing To Clear A Diva's Husband of Murder Charges. "You'd think a midnight prowler would have sense enough to get out after

A legendary adventurer seeking fame and treasure in 1880's Peru. A headstrong California beauty who'll do anything to protect her father, a professor determined

The bestselling DIXIE DIVAS mystery series continues! Trinket and her pals are, once again, caught in the middle of a murder scene... "Professor Sturgis is dead

He's the most dangerous gunman in the West. She's a "lady doctor" he can't resist. Will his secret torments keep them apart? How can she handle a wounded outlaw

Pushed beyond his limits. . . Scotsman Alexander Fraser has lost too much in his fight for freedom from the English. So when his younger brother is taken hostag

Casting Shadows collects for the first time the twisted poetry of Troy Harkin, wherein you will find yourself among scalpers, neck bags, and nocturnal sheep tha

He could not forgive her deception. She could not resist the desire they shared. When a scandal forces them to marry, their passions lead to dangerous secrets.