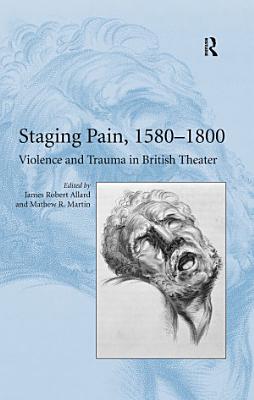 Bookending the chronology of this collection are two crucial moments in the histories of pain, trauma, and their staging in British theater: the establishment of secular and professional theater in London in the 1580s, and the growing dissatisfaction with theatrical modes of public punishment alongside the increasing efficacy of staging extravagant spectacles at the end of the eighteenth century. From the often brutal spectacle of late medieval mystery plays to early Romantic re-evaluations of eighteenth-century appropriations of spectacles of pain, the essays take up the significance of these watershed moments in British theater and expand on recent work treating bodies in pain: what and how pain means, how such meaning can be embodied, how such embodiment can be dramatized, and how such dramatizations can be put to use and made meaningful in a variety of contexts. Grouped thematically, the essays interrogate individual plays and important topics in terms of the volume's overriding concerns, among them Tamburlaine and The Maid's Tragedy, revenge tragedy, Joshua Reynolds on public executions, King Lear, Settle's Moroccan plays, spectacles of injury, torture, and suffering, and Joanna Baillie's Plays on the Passions. Collectively, these essays make an important contribution to the increasingly interrelated histories of pain, the body, and the theater.

Bookending the chronology of this collection are two crucial moments in the histories of pain, trauma, and their staging in British theater: the establishment o

Humorality in Early Modern Art, Material Culture, and Performance seeks to address the representation of the humors from non-traditional, abstract, and material

This edited collection explores what trauma—seen through an analytical lens—can reveal about the early modern period and, conversely, what conceptualization

Samuel Beckett and Pain is a collection of ten essays which explores the theme of pain in Beckett’s works. Experiencing both physical and psychological pain i

Alongside the works of the better-known classical Greek dramatists, the tragedies of Lucius Annaeus Seneca have exerted a profound influence over the dramaturgi

Visions and Voice-Hearing in Medieval and Early Modern Contexts

This book examines how the experiences of hearing voices and seeing visions were understood within the cultural, literary, and intellectual contexts of the medi

Through its rich foray into popular literary culture and medical history, this book investigates representations of regular and irregular medical practice in ea

The Politics of Rape

Beginning with the outbreak of the Irish Rebellion of 1641 and concluding with reactions to the accession of William and Mary, The Politics of Rape is the first

Men on Trial provides the first history of masculinity and the law in early nineteenth-century Ireland. It combines cutting-edge theories from the history of em