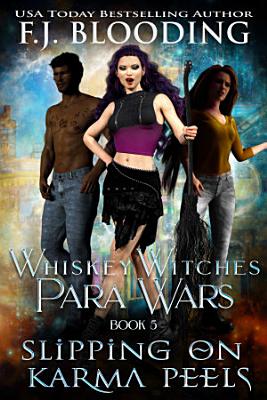 Paige and Dexx are leading paranormals to freedom as carefully and quickly as they can. But Wynonna Hunt, a karmic witch in New Orleans, is after a demon, Valfire. But the only way to get to him is through another demon, Threknal. The very same demon Paige released from the DoDO compound, the only living thing capable of touching her magick. Paige needs to stay in the game by eliminating the only viable threat to her magick. Wy needs to free her girlfriend from a demon deal made nine years ago. Together, they’ll stop Threknal as the U.S. trudges closer to war.

Paige and Dexx are leading paranormals to freedom as carefully and quickly as they can. But Wynonna Hunt, a karmic witch in New Orleans, is after a demon, Valfi

Wynonna is going to save Paige Whiskey

Dexx has overcome many things in his time as a shifter. A rogue angel, a deranged shifter witch, even the most deadly demon Paige has ever come across. Cardinal

Peace has been reached, but just how long will it last? Paige Whiskey has a lot on her plate. Her twins are following in their father’s footsteps and tearing

Revealing themselves just landed the paranormal world in turmoil. Paige and the entire town of Troutdale helped save the world on international TV. The internat

Dexx is kidnapped by DoDO and his memory is erased. In his new place in the DoDO headquarters in America, he fights against the block and is sent to England to

Eye of the Saber

Dexx has his alpha back and he's using it to protect his family - all of them. Dexx is finally back with his family and now they're in the greatest danger they'

Paige Whiskey has taken more than most people can take and she still hasn't quit. President Walton hasn't either. He's still intent on reuniting the United Stat

Have you ever felt a sense of belonging or familiarity in a place visited for the fi rst time? Has life’s obstacles ever left you confused as to why certain e

Explore How Past Lives Affect You in the Here and Now And learn to work through past life trauma Healing your past life karma is possible! Meet Your Karma share