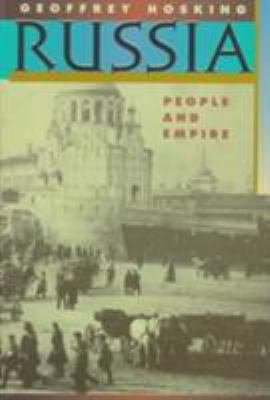 The Soviet Union crumbles and Russia rises from the rubble, once again the great nation--a perfect scenario, but for one point: Russia was never a nation. And this, says the eminent historian Geoffrey Hosking, is at the heart of the Russians' dilemma today, as they grapple with the rudiments of nationhood. His book is about the Russia that never was, a three-hundred-year history of empire building at the expense of national identity. Russia begins in the sixteenth century, with the inception of one of the most extensive and diverse empires in history. Hosking shows how this undertaking, the effort of conquering, defending, and administering such a huge mixture of territories and peoples, exhausted the productive powers of the common people and enfeebled their civic institutions. Neither church nor state was able to project an image of "Russian-ness" that could unite elites and masses in a consciousness of belonging to the same nation. Hosking depicts two Russias, that of the gentry and of the peasantry, and reveals how the gap between them, widened by the Tsarist state's repudiation of the Orthodox messianic myth, continued to grow throughout the eighteenth and nineteenth centuries. Here we see how this myth, on which the empire was originally based, returned centuries later in the form of the revolutionary movement, which eventually swept away the Tsarist Empire but replaced it with an even more universalist one. Hosking concludes his story in 1917, but shows how the conflict he describes continues to affect Russia right up to the present day.

Perspectives on the strategies of imperial rule pursued by rulers, officials, scholars, and subjects of the Russian empire. This book explores the connections b

The Soviet Union crumbles and Russia rises from the rubble, once again the great nation--a perfect scenario, but for one point: Russia was never a nation. And t

“A fresh and lively approach to understanding how the various Russian empires have worked.” —Slavic Review A fundamental dimension of the Russian historic

From the mid-sixteenth to the mid-nineteenth century Russia was transformed from a moderate-sized, land-locked principality into the largest empire on earth. Ho

Stretching from the tributaries of the Danube to the Urals and from the Russian forests to the Black and Caspian seas, the vast European steppe has for centurie

"This volume offers a lively introduction to Russia's dramatic history and the striking changes that characterize its story. Distinguished authors Barbara Alper

Russia's imperial past has shaped modern Russian identity and historical experience. The Russian Empire 1450-1801 surveys the empire's emergence and governance,

Russia and the Russians

Chronicles the history of the Russian Empire from the Mongol Invasion, through the Bolshevik Revolution, to the aftereffects of the Cold War.

Using a wide range sources, this book explores the ways in which the Russians governed their empire in Siberia from 1598 to 1725. Paying particular attention to