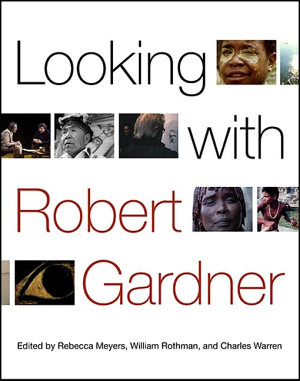 Assesses the range and magnitude of Robert Gardner’s achievements as a filmmaker, photographer, writer, educator, and champion of independent cinema. During his lifetime, Robert Gardner (1925–2014) was often pigeonholed as an ethnographic filmmaker, then criticized for failing to conform to the genre’s conventions—conventions he radically challenged. With the release of his groundbreaking film Dead Birds in 1963, Gardner established himself as one of the world’s most extraordinary independent filmmakers, working in a unique border area between ethnography, the essay film, and poetic/experimental cinema. Richly illustrated, Looking with Robert Gardner assesses the range and magnitude of Gardner’s achievements not only as a filmmaker but also as a still photographer, writer, educator, and champion of independent cinema. The contributors give critical attention to Gardner’s most ambitious films, such as Dead Birds (1963, New Guinea), Rivers of Sand (1975, Ethiopia), and Forest of Bliss (1986, India), as well as lesser-known films that equally exemplify his mode of seeking anthropological understanding through artistic means. They also attend to his films about artists, including his self-depiction in Still Journey OnM (2011); to his roots in experimental film and his employment of experimental procedures; and to his support of independent filmmakers through the Harvard Film Study Center and the television series Screening Room, which provided an opportunity for numerous important film and video artists to present and discuss their work. Rebecca Meyers is a filmmaker and Academic Film Programmer at Bucknell University, where she teaches in the Film/Media Studies program. She worked with Robert Gardner as editor on his late films. William Rothman is Professor of Cinema and Interactive Media at the University of Miami. Among his numerous books are three published by SUNY Press: Hitchcock: The Murderous Gaze, Second Edition and as editor, Cavell on Film and Three Documentary Filmmakers: Errol Morris, Ross McElwee, and Jean Rouch. Charles Warren is Lecturer on Film at Boston University and Associate of the Visual and Environmental Studies Department at Harvard University. He writes widely on film and has edited many books, including Gardner’s Making Dead Birds, Just Representations, and Human Documents: Eight Photographers.

Assesses the range and magnitude of Robert Gardner’s achievements as a filmmaker, photographer, writer, educator, and champion of independent cinema. During h

The History of Wigan

Includes reports from the Chancery, Probate, Queen's bench, Common pleas, and Exchequer divisions, and from the Irish land commission.

1988 Supplement to The Link Family

This supplemental volume extends the family data through 11 generations, and provides additions and corrections to the original work. Also available on CD-ROM #

The Monumental Inscriptions of the Cathedral, Parish Churches, and Cementeries of the City of Durham

Declaration and protestation of the Roman Catholics of England. To which is added the Correspondence of their Committees, and an Encyclical Letter from their Vicars Apostolic. [Edited by S. C.]

The Ceramic Art of Great Britain