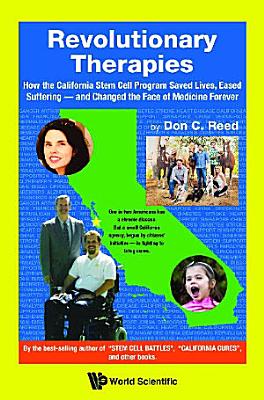 For author Don C Reed, father of a paralyzed son, the California Institute for Regenerative Medicine (CIRM) is the greatest medical advance since penicillin.REVOLUTIONARY THERAPIES is Reed's third book about the $3 billion stem cell program.Voted into law in November 2004, CIRM is now running out of money.Should its funding be renewed? Thereby hangs a tale, or rather several dozen of them, for each of the book's 71 short chapters is framed by a yarn or vignette.The factual background is accurate, vetted by the scientists, but Reed's goal is clearly both entertainment and education.A favorite example is a little girl named Evie, imprisoned in a plastic bubble: her body's immune system did not work, and she would die outside. She joined a CIRM clinical trial ... Imagine how Evie's parents felt — when she got well.Some stories are comical, like 'How Stem Cell Research Saved My Car'; others surprising, like the comparison between politics and the giant crocodile Gustave; others are tragic or inspiring: but all point to this: More than 100 million Americans suffer chronic disease, causing mountains of medical debt — and the only way to reduce that expense ($3 trillion last year) — is cure.Related Link(s)

For author Don C Reed, father of a paralyzed son, the California Institute for Regenerative Medicine (CIRM) is the greatest medical advance since penicillin.REV

Stem Cells: From Hype To Hope

During the last two decades, stem cells have progressed from merely a concept to a vibrant field of regenerative medicine which is aimed at addressing the root

Bulletin of the Atomic Scientists

The Bulletin of the Atomic Scientists is the premier public resource on scientific and technological developments that impact global security. Founded by Manhat

"When in 1989 Thomas Pynchon came out with his fourth novel after a 17-year hiatus from publishing, it was perhaps not without a hint of irony that the New York

The Roses of No Man's Land

In the summer of 1961 a young white seminarian from the North volunteered to work at the Ebenezer Batist Church in Atlanta, living in thr home of its legendary

In the spring of 1940, the German forces occupying Poland drove the Jews of Lodz into the Holocaust's second-largest and most hermetically-sealed ghetto. It fun

This book addresses ethical conflicts arising from saving the lives of patients who need a transplant while treating living and dead donors, organ sellers, anim

Stories on Mexican-Americans set in Arizona. In one, a young girl takes a firm stand to be allowed to speak Spanish in the school playground, in another, miners