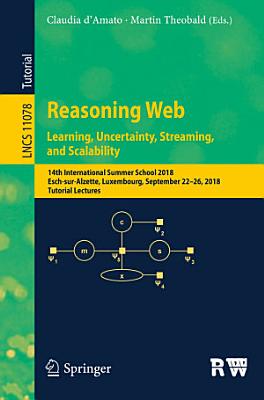 This volume contains lecture notes of the 14th Reasoning Web Summer School (RW 2018), held in Esch-sur-Alzette, Luxembourg, in September 2018. The research areas of Semantic Web, Linked Data, and Knowledge Graphs have recently received a lot of attention in academia and industry. Since its inception in 2001, the Semantic Web has aimed at enriching the existing Web with meta-data and processing methods, so as to provide Web-based systems with intelligent capabilities such as context awareness and decision support. The Semantic Web vision has been driving many community efforts which have invested a lot of resources in developing vocabularies and ontologies for annotating their resources semantically. Besides ontologies, rules have long been a central part of the Semantic Web framework and are available as one of its fundamental representation tools, with logic serving as a unifying foundation. Linked Data is a related research area which studies how one can make RDF data available on the Web and interconnect it with other data with the aim of increasing its value for everybody. Knowledge Graphs have been shown useful not only for Web search (as demonstrated by Google, Bing, etc.) but also in many application domains.

The distributed setting of RDF stores in the cloud poses many challenges, including how to optimize data placement on the compute nodes to improve query perform

This book provides a comprehensive and accessible introduction to knowledge graphs, which have recently garnered notable attention from both industry and academ

This volume contains the lecture notes of the 11th Reasoning Web Summer School 2015, held in Berlin, Germany, in July/August 2015. In 2015, the theme of the sch

This book describes methods and tools that empower information providers to build and maintain knowledge graphs, including those for manual, semi-automatic, and

This book constitutes the refereed proceedings of the 4th International Conference on Scalable Uncertainty Management, SUM 2010, held in Toulouse, France, in Se

This book constitutes the refereed proceedings of the 13th International Conference on Scalable Uncertainty Management, SUM 2019, which was held in Compiègne,

This book constitutes the refereed proceedings of the 5th International Conference on Scalable Uncertainty Management, SUM 2011, held in Dayton, OH, USA, in Oct