Muslim Youth in the Diaspora 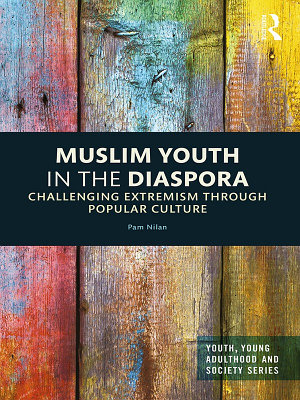 In a world where the term Islam is ever-increasingly an inaccurate and insensitive synonym for terrorism, it is unsurprising that many Muslim youth in the West struggle for a viable sense of identity. This book takes up the hotly-debated issue of Muslim youth identity in western countries from the standpoint of popular culture. It proposes that in the context of Islamophobia and pervasive moral panic, young Muslims frame up their identity in relation to external conditions that only see ‘good’ and ‘bad’ Muslims, on both sides of the ideological fence between Islam and the West. Indeed, by attempting to break down the ‘good’ versus ‘bad’ Muslim dichotomy that largely derives from western media reports, as well as political commentary, Muslim Youth in the Diaspora: Challenging Extremism through Popular Culture will enlighten the reader. It illuminates the way in which diasporic Muslim youth engage with, and are affected by, the radical Islamist meta-narrative. It examines their popular culture and online activity, their gendered sense of self, and much more. This original book will be of interest to students and scholars interested in the fields of sociology, cultural studies and social anthropology. It offers a particular focus on Islam for research in youth studies, youth culture, political radicalisation and religious identity. It will also be relevant to the sector of youth and social work, where practitioners seek to build cultural bridges with a new generation.

Muslim Youth in the Diaspora

In a world where the term Islam is ever-increasingly an inaccurate and insensitive synonym for terrorism, it is unsurprising that many Muslim youth in the West

Many Muslim societies, regardless of location, are displaying a 'youth bulge', where more than half their populations are under the age of 25. An increasingly g

This book is a sociological study of Muslim youth culture in two global cities in the Asia Pacific: Singapore and Sydney. Comparing young Muslims' participation

Muslim Diaspora in the West

In view of the growing influence of religion in public life on the national and international scenes, Muslim Diaspora in the West constitutes a timely contribut

Imagining Muslims in South Asia and the Diaspora

Literary, cinematic and media representations of the disputed category of the ‘South Asian Muslim’ have undergone substantial change in the last few decades

This edited collection addresses the relationship between diaspora, religion and the politics of identity in the modern world. It illuminates religious understa

New Horizons of Muslim Diaspora in Europe and North America

This book provides insights into some of the social topics related to the homogenization and stereotyping of Muslims. It explores the experiences of Muslims in

Routledge Handbook of Islam in the West

With new topics and contributions, this updated second edition discusses the history and contemporary presence of Islam in Europe and America. The book debates

Transnationalism in the Global City

This volume is a continuation of the EDMIDI series on Migration, Identities and Diversity. It addresses the research topic of transnationalism in global cities