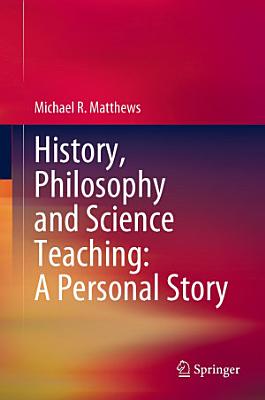 This book is an historical narrative of academic appointments, significant personal and collaborative research endeavours, and important editorial and institutional engagements. For forty years Michael Matthews has been a prominent international researcher, author, editor and organiser in the field of 'History, Philosophy and Science Teaching'. He has systematically brought his own discipline training in science, psychology, philosophy of education, and the history and philosophy of science, to bear upon theoretical, curricular and pedagogical issues in science education. The book includes accounts of philosophers who greatly influenced his own thinking and who also were personal friends - Wallis Suchting, Abner Shimony, Robert Cohen, Marx Wartofsky, Israel Scheffler, Michael Martin and Mario Bunge. It advocates the importance of clear writing and avoidance of faddism in both philosophy and in education. It concludes with a proposal for informed and enlightened science teacher education. "Michael Matthews has probably done more for the history and philosophy of science education than anyone else. This book is a riveting read. There are fascinating accounts about the journal Science & Education, the debates over constructivism, and fundamental conceptual issues that lie at the heart of science and science education. This is an essential read for anyone interested in science education." -- Michael J. Reiss, Professor of Science Education, University College London "The work of Michael Matthews in emphasizing the role of history and philosophy of science in science education has been truly monumental. Even more monumental is this much anticipated intellectual biography in which he recalls his early influences and subsequent intellectual encounters within diverse areas, including Catholicism, constructivism, the life and work of Joseph Priestley and the physics of the pendulum." -- Eric Scerri, Chemistry Department, University of California Los Angeles "Matthews records his intellectual maturation and career in a rich personal narrative. It is a fascinating trajectory through the major science educational ideas, trends and upheavals of the last four decades. He remains a sombre voice of reason, of Enlightenment virtues, of liberal education and of sound teacher education and science teaching." -- Roland M. Schulz, Centre for Imagination in Research, Culture and Education, Simon Fraser University.

This book is an historical narrative of academic appointments, significant personal and collaborative research endeavours, and important editorial and instituti

The Past, Present, and Future of Integrated History and Philosophy of Science

Integrated History and Philosophy of Science (iHPS) is commonly understood as the study of science from a combined historical and philosophical perspective. Yet

The Scientific Background to Modern Philosophy

Interdisciplinarity has become a buzzword in academia, as research universities funnel their financial resources toward collaborations between faculty in differ

The Scientific Background to Modern Philosophy

Through a collection of works from key thinkers in natural philosophy, the second edition of The Scientific Background to Modern Philosophy illuminates the cent