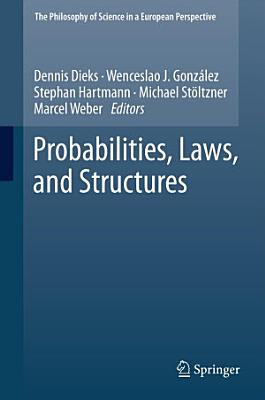 This volume, the third in this Springer series, contains selected papers from the four workshops organized by the ESF Research Networking Programme "The Philosophy of Science in a European Perspective" (PSE) in 2010: Pluralism in the Foundations of Statistics Points of Contact between the Philosophy of Physics and the Philosophy of Biology The Debate on Mathematical Modeling in the Social Sciences Historical Debates about Logic, Probability and Statistics The volume is accordingly divided in four sections, each of them containing papers coming from the workshop focussing on one of these themes. While the programme's core topic for the year 2010 was probability and statistics, the organizers of the workshops embraced the opportunity of building bridges to more or less closely connected issues in general philosophy of science, philosophy of physics and philosophy of the special sciences. However, papers that analyze the concept of probability for various philosophical purposes are clearly a major theme in this volume, as it was in the previous volumes of the same series. This reflects the impressive productivity of probabilistic approaches in the philosophy of science, which form an important part of what has become known as formal epistemology - although, of course, there are non-probabilistic approaches in formal epistemology as well. It is probably fair to say that Europe has been particularly strong in this area of philosophy in recent years.â€‹

This volume, the third in this Springer series, contains selected papers from the four workshops organized by the ESF Research Networking Programme "The Philoso

Ever since the inception of economics over two hundred years ago, the tools at the disciplineâ€™s disposal have grown more and more more sophisticated. This boo

Data Journeys in the Sciences

This groundbreaking, open access volume analyses and compares data practices across several fields through the analysis of specific cases of data journeys. It b

Mark Blaug: Rebel with Many Causes

This collection of eminent contributions discusses the ideas and works of Mark Blaug, who has made important and often pioneering contributions to economic hist

The World in the Model

Describes the radical shift in the study of economic science; where arguing with words was replaced by reasoning with mathematical models.

Methodology and History of Economics

This edited volume provides an in-depth exploration into the influential work of Wade Hands, examining the changing relationship between methodology and the his

Representation and Structure in Economics

This book provides a methodological perspective on understanding the essential roles of econometric models in the theory and practice. Offering a comprehensive

Drawing in particular on the work of Sraffa, Smith, Ricardo and Marx, the essays in this volume explore the characteristic features of the Classical economistsâ

The Nature and Method of Economic Sciences

The Nature and Method of Economic Sciences: Evidence, Causality, and Ends argues that economic phenomena can be examined from five analytical levels: a statisti

New Economics and Its History

The HOPE Supplement contains the proceedings of the History of Political Economy Conference held at Duke in April, 1996. The conference and the volume are devot