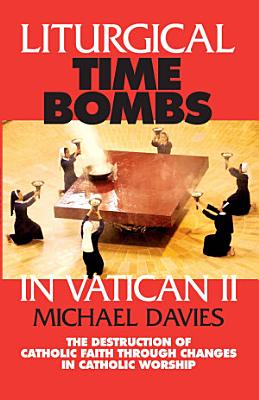 Michael Davies shows how Fr. Annibale Bugnini--before his dismissal by Pope Paul VI under suspicion of being a Freemason--was able to "reform" the Catholic Mass into the constantly evolving liturgy. Quoting Bishops and Cardinals as well as liberal "experts" and Protestant observers, he exposes the "time bombs" which were built into the Second Vatican Council's document on the liturgy by a few revolutionaries in order to be exploited later--and which have been detonating ever since. "I am convinced that the crisis in the Church that we are experiencing is to a large extent due to the disintegration of the liturgy."--Cardinal Ratzinger (now Pope Benedict XVI), 1998.

Michael Davies shows how Fr. Annibale Bugnini--before his dismissal by Pope Paul VI under suspicion of being a Freemason--was able to "reform" the Catholic Mass

Fifty years after the promulgation of the Constitution on the Sacred Liturgy, a great moment has dawned in which a more dispassionate assessment of the receptio

Liturgy in the Twenty-First Century

Amoris Laetitia and the spirit of Vatican II

Amoris Laetitia, Pope Francis' post-synodal exhortation on love in the family, turned out to be one of the most controversial documents of the Magisterium of th

Religion today is in competition with the leisure and entertainment industries. Gen Y, the postmodern generation, is open to spirituality; but most of todays yo

The Restoration and Organic Development of the Roman Rite

This is a serious, scholarly analysis of liturgy combining historical, philosophical and musicological aspects.

The ongoing debates on the present state and the future of the Roman Catholic worship are not confined to specialists, but are clearly of interest to a wider pu

Of those raised Catholic, just 13% still attend Mass weekly, and 37% say they have 'no religion'. But is this all the fault of Vatican II, and its runaway refor

Confessions of a Traditional Catholic

What is Catholic Traditionalism? Under what historical and cultural circumstances has it appeared? Why do some devout, knowledgeable Catholics embrace the parad