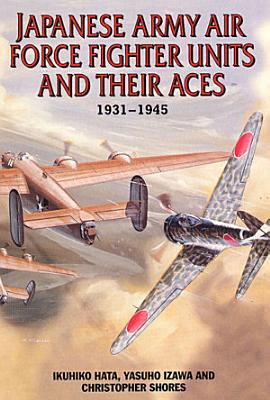 An extensive guide to Japan’s Army Air Force Units and their ace pilots during conflicts in the 1930s and ‘40s, now in English. Commencing with a detailed study of the development, equipment, and operations flown by this force since its inception immediately after the end of World War I, until the catastrophic conclusion of World War II, the initial section deals with the wars in China and Manchuria, as well as the Pacific War of 1941-1945. The second section explores the history of each unit, listing the types of aircraft used, the bases from which they flew, and the unit and formation commanders. Notable mission details are also included. Finally, the third section offers biographical notes for notable fighter pilots and features supporting listings and a glossary of Japanese terms. Photographs of pilots and aircraft are also included, along with line drawings indicating the unit markings carried. This revised edition is a companion volume to Japanese Naval Air Force Fighter Units and Their Aces, 1932–1945.

An extensive guide to Japan’s Army Air Force Units and their ace pilots during conflicts in the 1930s and ‘40s, now in English. Commencing with a detailed s

Hitherto only available in Japanese text, this unique work is now published in English language format and provides an in-depth review of the fighter units of t

An extensive guide to Japan’s Naval Air Force Fighter Units and their ace pilots during conflicts in the 1930s and ‘40s, now in English. The book begins by

This book is as good as we are likely to get on the subject in English. For Pacific Theater aerophiles, it's a must-have. --Barrett Tillman, author of Whirlwind

The book commences with a comprehensive account of the operations of navy fighter units throughout the period under review. This is followed by individual secti

In reviewing reports of air combat from Spain, China and the early stages of the war in Europe, the US Army Air Corps called for heavier armor and armament for

The scene is set with an overview of the respective states of the RAF and Japanese Airforce, and an explanation of how the American Volunteer Group (The Flying

Japan's attack on Pearl Harbor in 1941 was quickly followed by a rapid invasion of Malaya, a plan based entirely on the decisive use of its airpower. While the

The untold story of ferocious air and naval combat during the WWII Battle of Okinawa—drawn from primary sources and survivor interviews. This is the story of