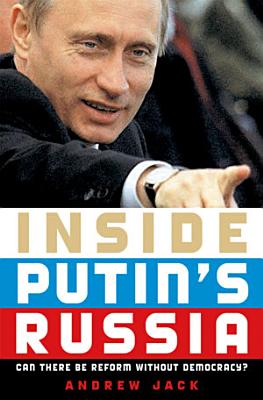 Written by Andrew Jack, the Moscow Bureau Chief of the Financial Times, here is a revealing look at the meteoric rise of Vladimir Putin and his first term as president of Russia. Drawing on interviews with Putin himself, and with a number of the country's leading figures, as well as many ordinary Russians, Jack describes how the former KGB official emerged from the shadows of the Soviet secret police and lowly government jobs to become the most powerful man in Russia. The author shows how Putin has defied domestic and foreign expectations, presiding over a period of strong economic growth, significant restructuring, and rising international prestige. Yet Putin himself remains a man of mystery and contradictions. Personally, he is the opposite of Boris Yeltsin. A former judo champion, he is abstemious, healthy, and energetic, but also evasive, secretive, and cautious. Politically, he has pursued a predominantly pro-western foreign policy and liberal economic reforms, but has pursued a hardline war in Chechnya and introduced tighter controls over parliament and the media and his opponents, moves which are reminiscent of the Soviet era. Through it all, Putin has united Russian society and maintained extraordinarily high popularity. Jack concludes that Putin's "liberal authoritarianism" may be unpalatable to the West, but is probably the best that Russia can do at this point in her history. Inside Putin's Russia digs behind the rumors and speculation, illuminating Putin's character and the changing nature of the Russia he rules. Andrew Jack sheds light on Putin's thinking, style and effectiveness as president. With Putin's second term just beginning, this invaluable book offers important insights for anyone interested in the past, present, and future of Russia.

Written by Andrew Jack, the Moscow Bureau Chief of the Financial Times, here is a revealing look at the meteoric rise of Vladimir Putin and his first term as pr

Written by the Moscow Bureau Chief of the "Financial Times," this is the first full-length account of the rise of Vladimir Putin and of his initial four years a

GETTING TO GRIPS WITH RUSSIA’S 21ST CENTURY TSAR Vladimir V. Putin has confounded world leaders and defied their assumptions as they tried to figure him out,

In the tradition of Hedrick Smith's The Russians, Robert G. Kaiser's Russia: The People and the Power, and David Remnick's Lenin's Tomb comes an eloquent and ey

WINNER OF THE ORWELL PRIZE • NEW YORK TIMES EDITORS’ CHOICE • “Unforgettable . . . a book about Putin’s Russia that is unlike any other.”—Patrick

From Cold War to Hot Peace

A revelatory, behind-the-scenes account of Russian-American relations, from a former US ambassador and 'Obama's top White House advisor on Russia policy' (The N

I'm Going to Ruin Their Lives

In 2012, on the eve of Vladimir Putin’s inauguration for a controversial third term as president, mass protests ended in violent clashes between demonstrators

The return of the 'Soviet' or the 'national' in Putin's Russia? -- The white knight and the red queen : blinded by love -- Shared mental models of the late sovi

All the Kremlin's Men

An extraordinary behind-the-scenes portrait of the court of Vladimir Putin, the oligarchs that surround it, and the many moods of modern Russia that reads like

This book argues that Putin's strategy for rebuilding the state was fundamentally flawed. Taylor demonstrates that a disregard for the way state officials behav