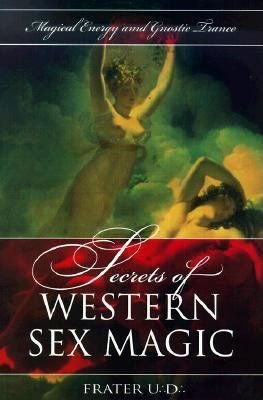 HARNESS THE MOST POWERFUL ENERGIES YOU HAVE EVER EXPERIENCED Unlock the powerful energies raised during the sex act and use them to manifest your deepest desires. During the sex act, your attention becomes focused into a "laser beam" of concentration. This power of concentrated thought is the foundation of all magical systems. Sex Magic's "secret" is that it's a tremendously powerful and easily learned way to consciously direct sexual energy and accomplish material and personal goals. Male and female energies are often entirely different and it would be folly to deny this; but experience shows that female magicians can be particularly successful in using and developing Sex Magic. Consequently, this book is aimed at both male and female readers unlike more traditional teachings written for men. Of all secret lore, Sex Magic has been reputed through the centuries to be the most dangerous. Today we know that this attitude was largely a reflection of the hostility held towards the flesh held by repressive religions. If we learn one thing from the shamanic cultures, it is the strong emphasis upon the role of the body in magic. Mind and Body are two facets of the One Thing in which Will, Imagination and Gnostic Trance are the three pillars of success. Contrary to the principles of Eastern Tantra, Western Sex Magic emphasizes the importance of actual orgasm, both male and female. Orgasm is the moment when the walls between consciousness and subconsciousness are sundered and direct access to the deeper levels of the psyche become possible, freeing up possible paranormal powers. Orgasm itself is sufficient to achieve gnostic trance provided that control is maintained and one does not simply lose consciousness, as most people do at the moment of ecstasy. Secrets Western Sex Magic teaches one of the oldest disciplines of this secret lore. It is a complete system of Sex Magic, in theory and practice - with exercises to develop related abilities for visualization, concentration, breath control, psychic energy arousal and flow along with full instructions on the projection of sexual energies for healing and manifestation, their use in Sigil Magic and the charging of Amulets & Talismans, Group Ritual, and the assumption of god-forms when working as a priestly couple, and the divine “Chymical Marriage” of ultimate union. This book is also an introduction to the entire field of practical magic, using our natural interest and involvement in sexual pleasure to illustrate and develop magical abilities and techniques.

A unique blend of sex magic and the Law of Attraction, this easy-to-use and practical book shows you how to use sexual energy to get anything you want. Popular

Sex magic is the attempt to increase the passion of someone, or to seduce them as a sex partner through magical means rather than through direct action. It can

Sex Magic! Welcome! We all know that sex connects us to beauty, to magic. Yet, we live in societies where sex is devalued, denigrated even. You are invited to r

Learn how to get consistent results with space/time magic. In Space/Time Magic Foundations, Taylor Ellwood walks you through how to apply the elements of time,

In this provocative book, Marla Segol explores the development of the kabbalistic cosmology underlying Western sex magic. Drawing extensively on Jewish myth and

The best for you. The extraordinary for your partner. Sex? The more you practice the better it stays. Pay attention! All the power of the Universe at your dispo

The Process of Magic