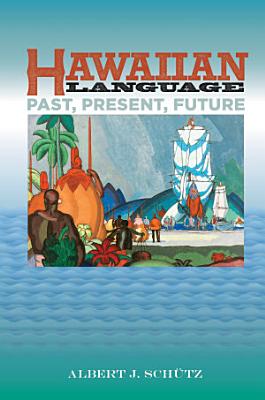 With color and black-and-white illustrations throughout, Hawaiian Language: Past, Present, Future presents aspects of Hawaiian and its history that are rarely treated in language classes. The major characters in this book make up a diverse cast: Dutch merchants, Captain Cook’s naturalist and philologist William Anderson, ‘Ōpūkaha‘ia (the inspiration for the Hawaiian Mission), the American lexicographer Noah Webster, philologists in New England, missionary-linguists and their Hawaiian consultants, and many minor players. The account begins in prehistory, placing the probable origins of the ancestor of Polynesian languages in mainland Asia. An evolving family tree reflects the linguistic changes that took place as these people moved east. The current versions are examined from a Hawaiian-centered point of view, comparing the sound system of the language with those of its major relatives in the Polynesian triangle. More recent historical topics begin with the first written samples of a Polynesian language in 1616, which led to the birth of the idea of a widespread language family. The next topic is how the Hawaiian alphabet was developed. The first efforts suffered from having too many letters, a problem that was solved in 1826 through brilliant reasoning by its framers and their Hawaiian consultants. The opposite problem was that the alphabet didn’t have enough letters: analysts either couldn’t hear or misinterpreted the glottal stop and long vowels. The end product of the development of the alphabet—literacy—is more complicated than some statistics would have us believe. As for its success or failure, both points of view, from contemporary observers, are presented. Still, it cannot be denied that literacy had a tremendous and lasting effect on Hawaiian culture. The last part of the book concentrates on the most-used Hawaiian reference works—dictionaries. It describes current projects that combine print and manuscript collections on a searchable website. These projects can include the growing body of manuscript and print material that is being made available through recent and ongoing research. As for the future, a proposed monolingual dictionary would allow users to avoid an English bridge to understanding, and move directly to a definition that includes Hawaiian cultural features and a Hawaiian worldview.

With color and black-and-white illustrations throughout, Hawaiian Language: Past, Present, Future presents aspects of Hawaiian and its history that are rarely t

A Dictionary of the Hawaiian Language

Reprint of the original, first published in 1865. To which is appended an English Hawaiian Vocabulary and a chronological table of remarkable events.

A Dictionary of the Hawaiian Language

Treasury of Hawaiian Words in One Hundred and One Categories

This Treasury offers a wealth of information for everybody.... [It] proves that a surprising number of Hawaiian words from our receding past still help us to ex

Hawaii, the fiftieth state, is one of the world's most popular destinations for travel, boasting over 7 million visitors each year. The population is enormously

For Dummies Travel guides are the ultimate user-friendly trip planners, combining the broad appeal and time-tested features of the For Dummies series with up-to

Hawaiian Surfing is a history of the traditional sport narrated primarily by native Hawaiians who wrote for the Hawaiian-language newspapers of the 1800s. An in