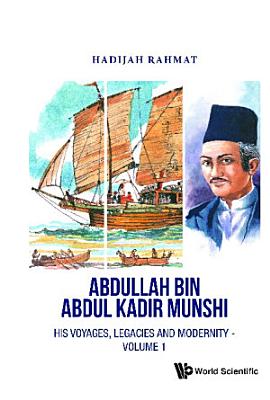 This book, Abdullah bin Abdul Kadir Munshi, is the most comprehensive, multi-disciplinary studies on Abdullah bin Abdul Kadir, widely known as Munshi Abdullah (1796-1854). He was a prominent literary figure and thinker in the Malay world in the 19th century and was also an early 'pioneer' of Singapore.The author, Professor Hadijah Rahmat, has spent more than 25 years studying Munshi Abdullah since her PhD studies in the School of Oriental and African Studies (SOAS), University of London, in 1992 to date. This book is covered in two volumes and is based on her research conducted using unexplored primary sources at several missionaries' archives at SOAS, London, Houghton Library, University Harvard, Library of Congress, Leiden University, KITVL, Holland, and the Perpustakaan Nasional Indonesia, Jakarta.The book consists of numerous academic papers presented at the regional and international seminars, and also published in international journals and as chapters of books. Besides academic papers, the excerpt of play titled Munsyi, sketches, poetry, and song, and interviews by the national media are also included.This book provides new insight into Abdullah's life, backgrounds, writings, his influences and legacies and the reactions and thought provoking views of the western and eastern scholars on Abdullah. The book is indeed the key reference for studies on Munshi Abdullah, Malay literature, and the history of Singapore, Malaysia, and colonialism in Southeast Asia.

This book examines classical Chinese poetry in Singapore from a sociocultural perspective. It is suitable for the readers in Chinese studies, Asian studies, and

Rainbows of Malay Literature and Beyond: Festshrift in Honour of Professor Md. Salleh Yaapar (Penerbit USM)

This Festschrift engages in the richness and variety of literatures and cultures of the Malay world, and goes beyond its shores to encounters between different

Everyone knows Singapore as the Lion City and the story behind of a Palembang prince, Sang Nila Utama, sighting a lion on this island that was first published 2

On 10 July 2020, Singapore held its 18th general elections in history and the 13th since independence in 1965. The ruling People's Action Party (PAP) once again

This work represents the first attempt to study how the process of learning to read is being handled in a broad cross-section of First, Second, and Third World

Journal of the Malaysian Branch of the Royal Asiatic Society