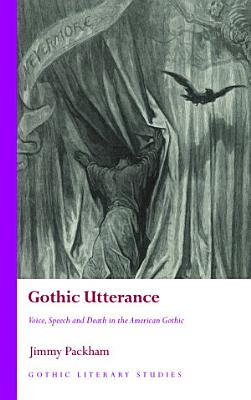 The Gothic has always been interested in strange utterances and unsettling voices – from half-heard ghostly murmurings and the admonitions of the dead, to the terrible cries of the monstrous nonhuman. Gothic Utterance is the first book-length study of the role played by such voices in the Gothic tradition, exploring their prominence and importance in the American literature produced between the Revolutionary War and the close of the nineteenth century. The book argues that the American Gothic foregrounds the overpowering affect and distressing significations of the voices of the dead, dying, abjected, marginalised or nonhuman, in order to undertake a sustained interrogation of what it means to be and speak as an American in this period. The American Gothic imagines new forms of relation between speaking subjects, positing more inclusive and expansive kinds of community, while also emphasising the ethical demands attending our encounters with Gothic voices. The Gothic suggests that how we choose to hear and respond to these voices says much about our relationship with the world around us, its inhabitants – dead or otherwise – and the limits of our own subjectivity and empathy.