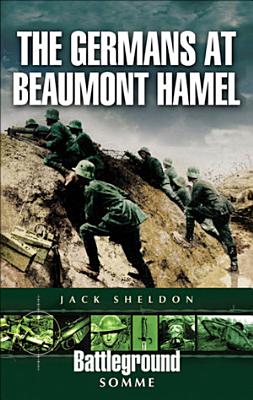 Beaumont Hamel is a name which conjures up appalling visions of the catastrophic reverse suffered by men of VIII Corps, British Fourth Army on 1st July 1916, when thousands of men were killed and wounded for no gains whatsoever. Ninety years on, the events of that day still exert a powerful fascination for those interested in the great trench battles. This book, which covers the Old Front Line from Redan Ridge to the Ancre, describes how the defense of the area became so strong, the reasons for German early success during the battle and explains how the British defeat of July was transformed into victory, when the fall of Beaumont Hamel marked the final flicker of success, before the battle was mired to a standstill in the mud.

Beaumont Hamel is a name which conjures up appalling visions of the catastrophic reverse suffered by men of VIII Corps, British Fourth Army on 1st July 1916, wh

"Now thanks to this guide, it will be possible to study possibly the most visited site (at least by those whose ancestors served in the British Expeditionary Fo

The Germans at Thiepval

Ninety years after the Battle of the Somme was fought, visitors continue to flock in very large numbers to the massive Memorial to the Missing at Thiepval, site

The Germans on the Somme

This highly illustrated book covers the activities of the German Army on the River Somme throughout the long years of The Great War. The initial fighting in 191

This book will be the first complete account of the operations of the German army in the battles north of Lille in the late autumn of 1914. The main emphasis wi

The German Army at Cambrai

This latest German Army book by Jack Sheldon covers a shorter (three week) timeframe than his earlier works. After an introductory chapter tracing the developme

The German Army at Passchendaele

Even after the passage of almost a century, the name Passchendaele has lost none of its power to shock and dismay. Reeling from the huge losses in earlier battl

The German Army in the Spring Offensives 1917

After the great battles of 1916, the Allied Armies planned to launch massive attacks North and South of the Somme. The German withdrawal to the Hindenburg Line

1001 Battles That Changed the Course of History

This historical account of humanity's 5000 year history of recorded conflict looks at ancient wars, modern conflict, and everything in-between.

The German Army on the Western Front 1915

Jack Sheldon examines the German mindset at the close of 1914 when it became apparent that a quick victory was no longer a possibility. Both sides were temporar