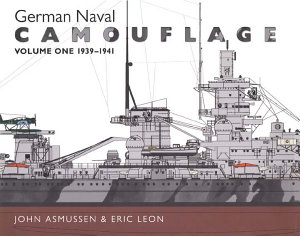 For half a century German warship camouflage has been something of a mystery for warship enthusiasts and modelmakers. The widespread destruction of naval archives at the end of the war left little documentation, while the ad hoc application of unofficial schemes in theatres like Norway led to many variegated and frequently altered patterns. This book, therefore, is based on close scrutiny of all available photos, including many only recently discovered, collated with the first-hand testimony of Kriegsmarine survivors. After decades of study, the authors are the worlds leading experts, and their work challenges many accepted views, while greatly expanding the general understanding of the subject. The fruits of their labours are presented in the form of exquisite colour illustrations of every scheme and variation for which evidence is available. For major ships these are sometimes only months apart, giving as complete a representation of their camouflage history as possible. There are no speculative views  if, for example, only the starboard side is known, there is no attempt to reconstruct a port side  so all information is reliable. This volume covers destroyers and all larger ships during the early war years, with a second part devoted to 1942-45 planned for completion in 2013. For warship enthusiasts its publication will be a major event, and it is certain to become the standard reference.

For half a century German warship camouflage has been something of a mystery for warship enthusiasts and modelmakers. The widespread destruction of naval archiv

This book completes a highly original and superbly illustrated two-volume survey of German naval camouflage and markings in the Nazi era. On first publication i

This is a major new study of Italian naval camouflage schemes developed and used during World War II. When Italy entered the War in June 1940, the Regia Marina

“Outstanding . . . covers the major units starting with the Deutschland Class, through the Scharnhorst and Gneisenau, to the Bismarck and Tirpitz.” —WW2 C

During the Second World War navies developed low visibility camouflage for their ships, on both the vertical and horizontal surfaces, in order reduce visibility

More than 1,200 illustrations depict the warships of the German Navy during the Second World War in this formerly Restricted document. Reprinted from a very rar

Although it is a subject of immense importance to warship enthusiasts, modelmakers, photograph collectors, and indeed academic naval historians, there has never

The warships of the World War II era German Navy are among the most popular subject in naval history with an almost uncountable number of books devoted to them.