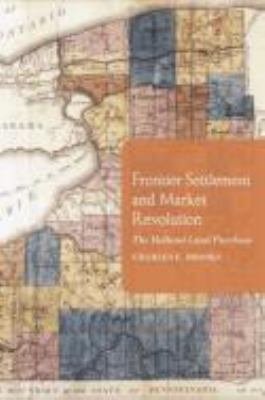 Land development in western New York contributed to some of the most dramatic and convulsive changes in nineteenth-century America. Charles E. Brooks studies the Holland Land Purchase to explain the market revolution in the New England and New York countryside by tracing the actual development of a frontier region. Brooks argues that historians have been too quick to view ordinary people as the pawns of various elites; the frontier farmers and small producers of the Holland Land Purchase, he maintains, cannot easily be placed along a continuum stretching from republican virtue to liberal self-interest. They simply wanted access to the land and resources necessary for a modest, comfortable life. Frontier Settlement and Market Revolution also explores the ecological impact of frontier settlement and the evolution of private land development based on the decision either to clear land for farming or to harvest timber resources for potash, lumber, maple sugar, fuel wood, and scrub pasture. When slumping land values and rising indebtedness generated a crisis for both landlords and settlers in the 1820s, conflict between the self-interest of small producers and the Holland Land Company's urge to control the region's economic growth was inevitable.

Land development in western New York contributed to some of the most dramatic and convulsive changes in nineteenth-century America. Charles E. Brooks studies th

All for the Union

When the South bombarded Fort Sumter in April 1861, the Ellithorpe family in rural New York answered President Lincoln’s call to defend the Union. For the nex

Seneca Possessed examines the ordeal of a Native people in the wake of the American Revolution. As part of the once-formidable Iroquois Six Nations in western N

Northeast Pennsylvania's Wyoming Valley was truly a dark and bloody ground, the site of murders, massacres, and pitched battles. The valley's turbulent history

After the Gold Rush

A dramatic history of a group of families in post-gold rush California who turned to agriculture when mining failed. “It is a glorious country,” exclaimed S

In the early 19th century, most of New York's farmland was controlled by a few families. In 1839, some tenants created a movement to destroy the estates and to

The Roots of American Industrialization

Looks at the rise of industrialization in the Eastern United States during the first half of the nineteenth century.