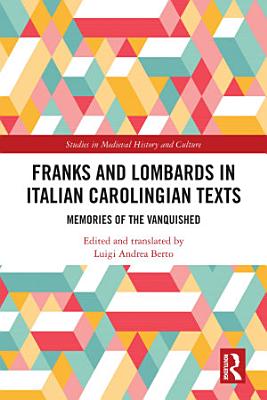 Franks and Lombards in Italian Carolingian Texts examines how historians of Carolingian Italy portrayed the history of the Lombards, Charlemagne’s conquest of the Lombard kingdom, and the presence of the Franks in the Italian Ppeninsula. The different contexts and periods in which these writers composed their works allows readers to focus on various aspects of this period and to highlight the different ways the vanquished remembered Carolingian rule in Italy. The ‘"memories’" of these authors are organized by topic, ranging from the origin of the Lombards to the conflicts that broke out among the Carolingians after Louis II died in 875. Besides presenting the English translation and the original Latin text of the excerpts from the Italian Carolingian historical works, the volume also contains the English translations of the same events recorded in Frankish and papal narrative texts. In this way it is possible to compare different memories about the same episode or topic. The book will appeal to scholars and students of the Lombards and Carolingians, as well as all those interested in medieval Europe.

Franks and Lombards in Italian Carolingian Texts examines how historians of Carolingian Italy portrayed the history of the Lombards, Charlemagne’s conquest of

Monetisation and Commercialisation in the Baltic Sea, 1050-1450

This book examines the view of women held by medieval common lawyers and legislators, and considers medieval women’s treatment by and participation in the pro

The Bible and Jews in Medieval Spain

The Bible and Jews in Medieval Spain examines the grammatical, exegetical, philosophical and mystical interpretations of the Bible that took place in Spain duri

The Cursed Carolers in Context

Jews and Converts in Late Medieval Castile examines the ways in which Jewish-Christian relations evolved in Castile, taking account of social, cultural, and rel

Mobile Saints examines the central medieval (ca. 950–1150 CE) practice of removing saints’ relics from rural monasteries in order to take them on out-and-ba

History and Memory in the Carolingian World

The writing and reading of history in the early Middle Ages form the key themes of this 2004 book. The primary focus is on the remarkable manifestations of hist

Italy and the East Roman World in the Medieval Mediterranean