Folk Music of Britain – and Beyond 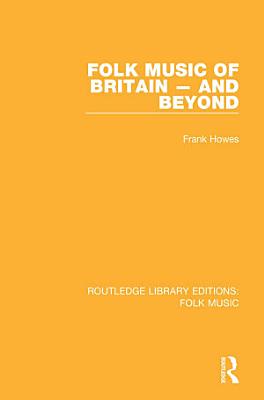 Originally published in 1969. Until the latter half of the nineteenth century, it was thought that England, alone among the European countries, and unlike Scotland and Ireland where collections of ballads and songs had already been published as early as the eighteenth century, had no important native tradition of music. The founding of the (English) Folk-Song Society in 1898, however, and the pioneering work of such collectors as Lucy Broadwood, the Reverend S. Baring-Gould and, later, Cecil Sharp uncovered a still flourishing folk culture. Since then interest in this subject has grown steadily, and the bibliography of publications of actual folk-songs and ballads is now huge. Frank Howes sets out a general and scholarly introduction, first examining in detail the history and origins of folk music and going on to show the nature and vast amount of the material, enforcing his arguments with a wealth of examples from around the world. His discussion of the differences of national idiom leads on to a comparison of British folk music with that of other European countries and America, in which he pays due attention to the Celtic and Norse traditions. Separate sections on balladry, carols, street cries, broadsides, sea shanties, nursery rhymes and instruments illustrate both the variety of folk music and the extent to which it permeates our national heritage.

Folk Music of Britain – and Beyond

Originally published in 1969. Until the latter half of the nineteenth century, it was thought that England, alone among the European countries, and unlike Scotl

Journal of the Folk-Song Society

Journal of the Folk-Song Society

This book traces the early history of the first English folksong revival during the late Victorian era, focusing on the work of three prominent song collectors,

Postwar Politics, Society and the Folk Revival in England, 1945-65

The English folk revival cannot be understood when divorced from the history of post-war England, yet the existing scholarship fails to fully engage with its ro

The Show Must Go On! Popular Song in Britain During the First World War

Using a collection of over one thousand popular songs from the war years, as well as around 150 soldiers’ songs, John Mullen provides a fascinating insight in

First published in 1998, the aim of this catalogue is to help students, researchers and librarians determine the UK locations of over 2,000 music periodical tit

The Function of Song in Contemporary British Drama

This comprehensive study formulates an original theory that dramatic song must be perceived as a separate genre situated between poetry, music, and theater. It