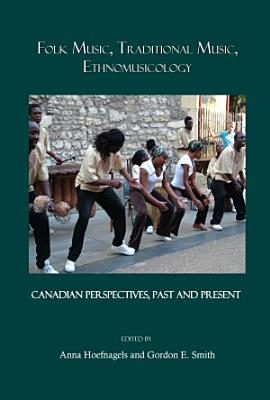 Folk Music, Traditional Music, Ethnomusicology: Canadian Perspectives, Past and Present features the proceedings of the Fiftieth Annual Conference of the Canadian Society for Traditional Music / La Société Canadienne pour les Traditions Musicales (formerly the Canadian Folk Music Society / La Société canadienne de musique folklorique) that took place in November, 2006 in Ottawa at Carleton University and the Canadian Museum of Civilization. This publication showcases the diversity of music research currently being conducted by folk and traditional music specialists, ethnomusicologists, and practicing musicians in Canada. The papers are organized in five sections according to common themes in contemporary research in ethnomusicology and folk music studies, and each section is preceded by a short introduction which highlights the section’s theme(s) as well as the individual papers. Folk Music, Traditional Music, Ethnomusicology: Canadian Perspectives, Past and Present confirms the rich history of the Canadian Society for Traditional Music, a history that comprises enormous changes in scholarly research, musical practice, emergent technologies, changes in doing fieldwork, and shifting identity boundaries over the past fifty years. This volume is intended as a contribution to published literature on ethnomusicological and folklore research in Canada, creating a new resource of historical, contemporary, and scholarly relevance that will appeal to academics and music enthusiasts alike. "Canadian ethnomusicologists' expertise in the realm of First Nations musics, and Anglo, Celtic and French folksong repertories is already well established. This volume shows us the breadth of cultural territory with which 21st-century Canadian scholars of music and scholars of Canadian musics are now engaged, as well as their theoretical and methodological sophistication. " —Kati Szego, School of Music, Memorial University

Music and dance in Canada today are diverse and expansive, reflecting histories of travel, exchange, and interpretation and challenging conceptions of expressiv

Written by an international team of acclaimed folklorists, this reference text provides a cross-cultural survey of the major types and methods of inquiry in fol

This unique reference book offers a holistic description of the multifaceted field of systematic musicology, which is the study of music, its production and per

Ethnomusicology: A Research and Information Guide is an annotated bibliography of books, recordings, videos, and websites in the field of ethnomusicology. The b