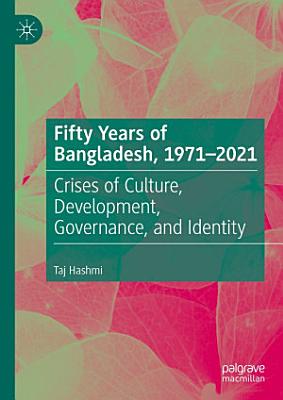 This book, the first historical sociology of its kind concerning Bangladesh, examines the country's what-went-wrong-syndrome during the first fifty years of its existence, 1971-2021. The work is an exception to the traditional studies on modern and contemporary Bangladesh. The study is also a post-history of united Pakistan. Busting several myths, it sheds light on many known and unknown facts about the history, politics, society, and culture of the country. Besides being a twice-born country – liberated twice, from the British in 1947 and from West Pakistanis in 1971 – it is also an artificial entity suffering from acute crises of culture, development, governance, and identity. Hashmi attributes the culture and identity crises to the demographic byproducts of bad governance. In addition to being overpopulated, Bangladesh is also resource-poor and has one of the most unskilled populations, largely lumpen elements and peasants. According to Marx, these people represent “the unchanging remnants of the past”. The second round of independence empowered these lumpen classes, who suffer from an identity crisis and never learn the art of governance. The proliferation of pseudo-history about liberation has further divided the polity between the two warring tribes who only glorify their respective idols, Mujib and Zia. Pre-political and pre-capitalist peasants’ / lumpen elements’ lack of mutual trust and respect have further plagued Bangladesh, turning it into one of the least governable, corrupt, and inefficient countries. It is essential to replace the pre-capitalist order of the country run by multiple lumpen classes with capitalist and inclusive institutions.

This book, the first historical sociology of its kind concerning Bangladesh, examines the country's what-went-wrong-syndrome during the first fifty years of its

President Ziaur Rahman holds a unique distinction to make the historic declaration of the Independence of Bangladesh. He then led the glorious liberation war to

Bangladesh under the Hasina-led traumatically tyrannical and transgressive Awami regime is a story of disaster and damnation. The fraud and fascist regime, a la

Towards a Sustainable Economy

This book explores Bangladesh's shift from a 'bottomless pit' into a 'middle-income' category. Six chapters in the book cover topics on microfinance growth, rea

Processes of post-war reconstruction, peacebuilding and reconciliation are partly about fostering stability and adaptive capacity across different social system

This Open-Access-Book covers different aspects of the low-carbon energy transformation in a unique manner, with a particular focus on two regions, South Asia an

This book assesses the digital Bangladesh initiative of the government through different lenses: supply-side and demand-side perspectives and policy diffusions.