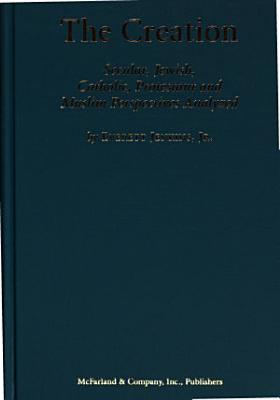 The major monotheistic religions of the world--Judaism, Christianity and Islam--have certain elements in common, particularly in their scriptures concerning the beginnings of life and the early history of human beings. This shared beginning is compellingly worth further study. Common ground and common threads can only help a dialogue between people of different faiths. This reference work could be a tool toward greater understanding of other faiths and focuses on the story of the creation of the universe and of humans. Part One traces the development of the earth and its inhabitants from a scientific viewpoint so that the humanistic perspective may be contrasted with the scriptural accounts to follow. Part Two features an introduction to the Tanakh, information on the Torah, and what is known about its authors, and other influences on the Jewish religion, followed by actual scriptures from the Torah from the creation through the destruction of the Tower of Babel. Then a section each is devoted to an explanation of the Catholic, Protestant and Fundamentalist Christian interpretations of these stories, citing scripture as appropriate. Part Three affords a Muslim perspective with excerpts from the Sirah that refer to events and characters from the early chapters of Genesis. The appendices are rich--various chronologies of similar events based on the different scriptures, tables of contents for the various holy books, tables presenting summaries of a particular perspective on a subject or comparisons between two perspectives and much more.

The major monotheistic religions of the world--Judaism, Christianity and Islam--have certain elements in common, particularly in their scriptures concerning the

This second volume details the continued spread of Muslim culture and peoples during the sixteenth, seventeenth and eighteenth centuries, a period that saw the

This first volume covers the development of Islam in the period from the birth of Muhammad in C.E. 570 through 1500, during which Islam grew to dominate the are

This third volume of the Pan-African Chronology set covers 1914 through 1929, a time of two seminal events: World War I and the Black Awakening. In World War I,

Chronicles the most significant events in the African diaspora from the end of the Civil War through the pre-WWI years, with year-by-year entries arranged geogr

This book is an intriguing study on two controversial topics: baptism in the name of Jesus Christ and the oneness of God. Baptism has been a theme of contention

Possessed by the Right Hand

In Possessed by the Right Hand, Bernard K. Freamon offers a comprehensive legal history of slavery and slave-trading in Islam, considering the impact of Western

Why Are We Facing Never Ending Terrorism? Political violence and terrorism have been, literally, bleeding humanity throughout the world. This book sheds light o