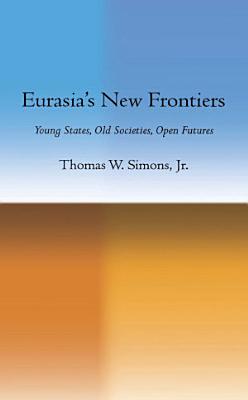 "As a global power, the United States will always be interested in Eurasia and engaged with its peoples and nations. Eurasia is too large and important a part of the world to be ignored. It casts a shadow of the old Soviet threat forward in time, and its axis-the Russian Federation-is nuclear-armed. So are its neighbors, China to the east, India and Pakistan to the south; and there are others in the queue. Eurasia's new nations are players on today's most urgent global issues: terrorism; counterproliferation of weapons of mass destruction; economic stability and growth (including its energy centerpiece); stable political development (including democratization, its long-term key).... So the context for why Eurasia matters is very large."—from Eurasia's New Frontiers In Eurasia's New Frontiers, Thomas W. Simons, Jr., a distinguished veteran of the U.S. Foreign Service with extensive experience in the Communist and post-Communist worlds, assays the political, economic, and social developments in the fifteen successor states to the Soviet Union that comprise Eurasia—from Estonia to Azerbaijan and from Tajikistan to Ukraine, centered on Russia. He makes a compelling case that the United States can play a large role in shaping the future of this vast and strategic region, and at less cost than during Soviet times. This can only be accomplished, however, if U.S. policy toward Eurasia shifts from alternating hand-wringing and indifference to steady and flexible engagement that focuses on its fledgling individual nation-states. Throughout Eurasia, Simons shows, civil society is anemic, market reforms have been discredited, and political development has been stunted. Authoritarian and semiauthoritarian regimes are firmly in place from Belarus to Central Asia; in Ukraine, Moldova, and even Russia, some democratic forms have taken hold; but everywhere, politics features struggle among elites over access to economic resources, albeit often defined in terms of "sovereignty." Almost everywhere, states are consolidating: as resurgent Russia presses on its neighbors, they can now press back, alone or with help from the outside world. Simons believes that the post-Soviet space needs stable development of state institutions within which new civil societies can take root and grow. Potentially strong state institutions are, in his view, Soviet Communism's "secret gift" to Eurasia, and they may well enable the region to become in time an arc of promise, an anchor of relative stability in a troubled part of the world. For that to happen, Simons argues, the nationalism that gives content to these new state structures must be the right kind: civic and inclusionary rather than ethno-religious and exclusionary. Because Russia is so diverse and its nationalism so state-oriented, Simons also sees it as more likely to develop that kind of civic nationalism than some of its new neighbors. The United States has a limited but real role to play in helping or hindering its emergence everywhere in Eurasia. If it wishes to help, though, the U.S. must realize that in this part of the world the path to democracy leads through state development. The U.S. will continue to advocate for its core values, but it can best act as a City on the Hill for Eurasia if its policy centers on the emerging new states of today, for they must be the incubators of tomorrow's civil societies.

"As a global power, the United States will always be interested in Eurasia and engaged with its peoples and nations. Eurasia is too large and important a part o

This book focuses on Central Asia's place in world affairs and how international politics of state-building has affected the Asian region, thus filling the gaps

New Central Asia, The: The Regional Impact Of International Actors

This book focuses on Central Asia's place in world affairs and how international politics of state-building has affected the Asian region, thus filling the gaps

Examines the political, economic, and social developments of the fifteen successor states to the Soviet Union, the role the United States has had in assisting i

The Struggle for the Eurasian Borderlands

A major new account of the Eurasian borderlands as 'shatter zones' which have generated some of the world's most significant conflicts.

This book presents an unprecedented dialogue with leading U.S., Russian, and Eurasian economic experts and policy-makers on the pivotal issues of economic refor

China has emerged as a dominant power in Eurasian affairs that not only exercises significant political and economic power, but increasingly, ideational power t

Connectivity, as well as conflict, characterizes Eurasia. This edited volume explores dynamic geopolitical and geo-economic links reconfiguring spaces from the