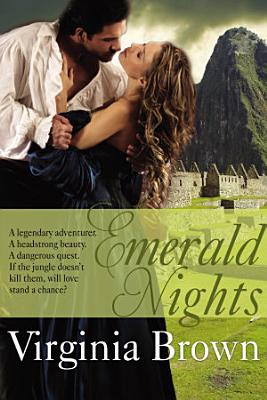 A legendary adventurer seeking fame and treasure in 1880's Peru. A headstrong California beauty who'll do anything to protect her father, a professor determined to find the lost Incan city of Vilcapampa. If the jungle doesn't kill them, will love stand a chance? The lady has just met her match. He wasn't her type of man. And yet . . . "We're probably making a big mistake," he said roughly, and she nodded. "Very likely." "Are you sure this is what you want?" She drew in a deep, trembling breath. "More than anything." His reaction took her by surprise. He pulled her to him, his mouth crashing down on hers with bruising force, invading her with his tongue as he backed her toward the bed. It almost hurt, but she tasted his urgency, and heat and desire rose in her as sharp and strong. He shoved a hand through her hair, loosened the pins and let them scatter atop the mattress and onto the floor, raked his fingers through the loose braids to free it around her shoulders, splayed his fingers over her back, tugged at laces that held her jabot around her neck. He tossed it aside, unbuttoned her blouse and peeled it down her arms, freed her mouth for a moment to regard the Flynt Waist beneath with less than enthusiastic scrutiny. Heart hammering, she helped him untie the laces and stood silently when he slid it off her. . . . Virginia Brown has written more than fifty historical and contemporary romance novels. Many of her books have been nominated for Romantic Times' Reviewer's Choice Award, Career Achievement Award for Love and Laughter, and Career Achievement Award for Adventure. She is also the author of the bestselling Dixie Diva mystery series and the acclaimed mainstream Southern drama/mystery, Dark River Road, which won the national Epic e-Book Award in 2013 for Best Mainstream.

A legendary adventurer seeking fame and treasure in 1880's Peru. A headstrong California beauty who'll do anything to protect her father, a professor determined

Knights of Emerald 02 : The Dragons of the Dark Emperor

The Knights of Emerald: This epic tale takes place in a forgotten world in a time of great unrest as Amecareth, the Dark Lord of the Insect People, attempts to

"a heartfelt tale of heroism sure to appeal to fantasy fans and lovers of old-fashioned adventure alike." ~ Blueink "A virtuous and riveting debut that pays tri

The bestselling DIXIE DIVAS mystery series continues! Trinket and her pals are, once again, caught in the middle of a murder scene... "Professor Sturgis is dead

Pushed beyond his limits. . . Scotsman Alexander Fraser has lost too much in his fight for freedom from the English. So when his younger brother is taken hostag

While others gamble for their lives, Jason Joval is gambling his away... Don’t miss the exclusive Stars Beckon Call Book Launch Bonuses in the back of the boo