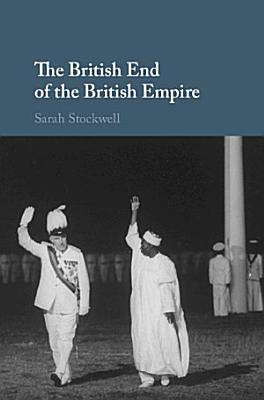 How did decolonization impact on Britain itself? And how did Britain manage its transition from colonial power to postcolonial nation? Sarah Stockwell explores this question principally via the history of the overseas engagements of key institutions that had acquired roles within Britain's imperial system: the Universities of Oxford and Cambridge, the Bank of England, the Royal Mint, and the Royal Military Academy Sandhurst. Using a huge range of fresh archival sources, the author shows how these institutions fashioned new roles at the end of empire, reconfiguring their activities for a postcolonial world and deploying their expertise to deliver technical assistance essential for the development of institutions in new Commonwealth states. This study not only pioneers an entirely new approach to the history of the British end of the British empire, but also provides an equally novel cross-sectoral analysis of institution-building during decolonization and highlights the colonial roots of British postcolonial aid.

How did decolonization impact on Britain itself? And how did Britain manage its transition from colonial power to postcolonial nation? Sarah Stockwell explores

The present volume aims at outlining a new field of research with regard to the history of diplomacy: the material culture of diplomatic interaction in early mo

The Oxford Handbook of the Ends of Empire

This handbook is currently in development, with individual articles publishing online in advance of print publication. At this time, we cannot add information a

Critical Readings in the History of Christian Mission

This selection of texts introduces students and researchers to the multi- and interdisciplinary field of mission history. The four parts of this book acquaint t

Medicine and Colonial Engagements in India and Sub-Saharan Africa

After a humiliating defeat in the Crimean War, the Russian Empire struggled to reassert its position as a global power. A small noble family returned from the s

British civic society at the end of empire

This book is about the impact of decolonisation on British civic society in the 1960s. It shows how participants in middle class associational life developed op

The British Press, Public Opinion and the End of Empire in Africa

Eating and Identity in Postcolonial Fiction

This book focuses on the fiction of four postcolonial authors: V.S. Naipaul, Anita Desai, Timothy Mo and Salman Rushdie. It argues that meals in their novels ac