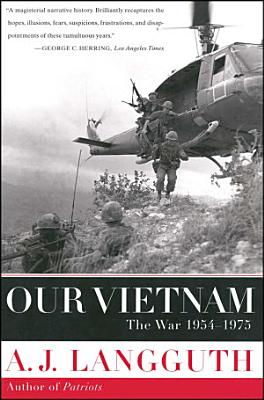 "Laos was never really ours after 1954. South Vietnam is and wants to be." -- McGeorge Bundy, Washington, D.C., 1961 "The Americans thought that Vietnam was a war. We knew that Vietnam was our country." -- Luu Doan Huynh, Hanoi, 1999 Twenty-five years after its end, with many records and archives newly opened and many participants now willing to testify, historian and journalist A. J. Langguth has written an authoritative, news-making account of the Vietnam War from both the American and Vietnamese perspectives. Our Vietnam is a sweeping and evenhanded history of the Vietnam War as it was lived by U.S. presidents in Washington and Communist leaders in Hanoi, by American Marines at Khe Sanh and war protesters at home, by Vietcong guerrillas in the Mekong Delta and South Vietnamese troops in the Central Highlands. Langguth traveled to Hanoi, Ho Chi Minh City and Beijing to interview scores of ranking Communist officials as well as those who played significant but lesser-known roles. As a correspondent for The New York Times in South Vietnam in the 1960s, he observed most of the prominent U.S. officials involved in the war, including Secretary of Defense Robert McNamara, General William Westmoreland, Ambassador Maxwell Taylor and presidential adviser McGeorge Bundy. He has drawn on recently released documents and secret White House tapes to bring the architects of the war and the events of that time into sharp focus. Our Vietnam provides a rare look at the secret maneuvering within Hanoi's Politburo, where an implacable southerner named Le Duan emerges as the man -- even more than the famous General Giap -- who shaped the Communist struggle. It reveals the palace intrigues of President Ngo Dinh Diem and his sister-in-law Madame Nhu in Saigon. It takes us inside the waffling and self-deceived White Houses of Kennedy, Johnson and Nixon, and shows how those presidents tried to muzzle the press and deceive the American public. It documents the ineptness and corruption of our South Vietnamese allies, recounts the bravery of soldiers on both sides at Ap Bac and Ia Drang, and explores inhuman behavior at My Lai and within the prison walls of the Hanoi Hilton. It makes vivid again the antiwar demonstrations that led to rioting in Chicago and four dead students at Kent State. As the struggle shifts to the peace talks in Paris, Langguth contrasts Henry Kissinger's version of the negotiations that led to the withdrawal of American troops with other, more objective firsthand accounts. The frantic evacuation of U.S. diplomats and advisers from Saigon during the Communists' final offensive in April 1975 is the poignant climax to this encompassing story of an enemy's unbroken will and America's fatal miscalculations. With its broad sweep and keen insights, Our Vietnam brings together the kaleidoscopic events and personalities of the war -- the assassinations and battles, the strategists and soldiers, the reporters and protesters -- into one engrossing and unforgettable narrative.

"Laos was never really ours after 1954. South Vietnam is and wants to be." -- McGeorge Bundy, Washington, D.C., 1961 "The Americans thought that Vietnam was a w

'Courage and Hope' gives voice to the real life experiences of 12 HIV-positive teachers 5 of whom are women from Burkina Faso, Cameroon, Ghana, Kenya, Mozambiqu

The education sector plays a key â€œexternalâ€? role in preventing and reducing the stigma surrounding HIV/AIDS. It also plays an important â€œintern

Decisions and Orders of the National Labor Relations Board

This series of entertaining essays provides a unique insight into some of the key discoveries that have shaped the field of parasitology. Based on interviews wi

Helminth Infections and their Impact on Global Public Health

This is a thoroughly revised edition of a well-received reference work on helminthiases and their impact on worldwide public health. The carefully presented col

This pocket-sized reference on key environmental data for over 200 countries includes key indicators on agriculture, forestry, biodiversity, energy, emission an

Social Entrepreneurship in the Age of Atrocities

ïHow can anyone make a difference in a world marked by genocide, civil war, refugee crises, disease epidemics? With conscience, hope, and sweat equity, Dr. Zac

This timely Handbook takes stock of the range of debates that characterise the field of international education and development, and suggests key aspects of a r