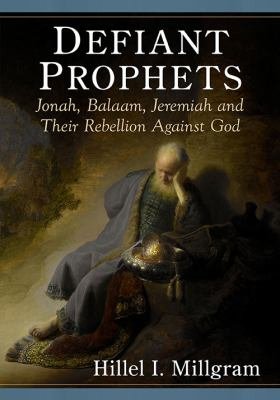 This book examines the tales of three remarkable figures of the biblical world: the tragic prophet Jeremiah, and the two atypical prophets Jonah and Balaam. Jeremiah was cursed from birth and condemned to a lifelong losing battle against national disaster. Jonah was notorious for his connection with a whale, whereas Balaam was best known as the owner of a talking donkey. Yet these prophets (servants of their deity) are portrayed as rebels against their god. This book contends that these tales, beyond their intrinsic appeal as stories, were written to serve as metaphors. Although set in ancient times and in the exotic Near East, the issues that underlie these gripping tales are not unfamiliar to modern times and Western lives. These prophets represent "everyman" and these unusual dramas explore the phenomenon of revolt against restrictive conditions and against authority.

This book examines the tales of three remarkable figures of the biblical world: the tragic prophet Jeremiah, and the two atypical prophets Jonah and Balaam. Jer

In this timely and innovative book, Tamar Katriel takes a language and discourse-centred approach to the subject of peace activism in Israel-Palestine, one of t

Discover the role of the prophetic ministry and why it is so necessary today. Through this knowledge, you will: Discover how God awakens, calls, grooms and prod

Defiant Joy is a powerful narrative of Chesterton's life through his literary accomplishments. Amid currents of modernity that sought to displace the Christian

This carefully edited collection has been designed and formatted to the highest digital standards and adjusted for readability on all devices. George MacDonald