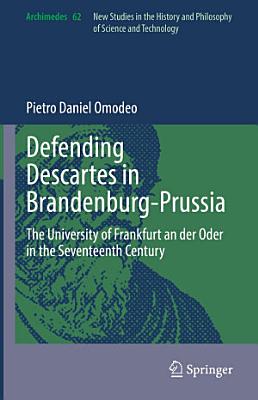 This volume is a study of the many dimensions of the early reception of Cartesianism in German-speaking Europe during the seventeenth century based on the case of the University of Frankfurt an der Oder. It investigates the broad context of that discussion, which was at once scientific, cultural, political and socio-institutional. Chapter by chapter, the book sheds light on every aspect of the environment of the time. It is aimed at historians of science and philosophy, as well as scholars investigating German-speaking Europe of the 17th century.

Descartes in the Classroom

The volume offers the first large-scale study of the teaching of Descartes’s philosophy in the early modern age, across the borders of countries, and confessi

Remembered mainly as a logician and mathematician, Leibniz also endeavored to resolve political and religious conflicts of his day by bringing opponents into ne

Germany and the Holy Roman Empire

In the first single-author account of German history from the Reformation to the early nineteenth century since Hajo Holborn's study written in the 1950s, Dr Wh