Curse of the Night Witch 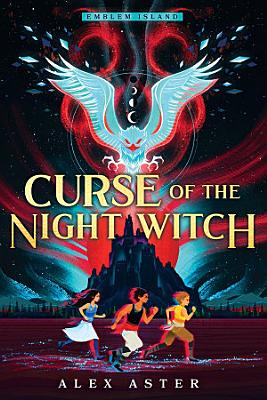 An #ownvoices fast-paced series starter steeped in Colombian mythology and full of adventure, perfect for fans of Aru Shah and the End of Time and Percy Jackson. Filled with fantasy, action, adventure, and an unforgettable trio of friends. A Seventeen.com Most Anticipated Book of Summer! A Zibby Owens Summer Reading Pick on Good Morning America! On Emblem Island all are born knowing their fate. Their lifelines show the course of their life and an emblem dictates how they will spend it. Twelve-year-old Tor Luna was born with a leadership emblem, just like his mother. But he hates his mark and is determined to choose a different path for himself. So, on the annual New Year's Eve celebration, where Emblemites throw their wishes into a bonfire in the hopes of having them granted, Tor wishes for a different power. The next morning Tor wakes up to discover a new marking on his skin...the symbol of a curse that has shortened his lifeline, giving him only a week before an untimely death. There is only one way to break the curse, and it requires a trip to the notorious Night Witch. With only his village's terrifying, ancient stories as a guide, and his two friends Engle and Melda by his side, Tor must travel across unpredictable Emblem Island, filled with wicked creatures he only knows through myths, in a race against his dwindling lifeline. You'll love Curse of the Night Witch if you're looking for: Summer reading for tweens and teens ages 11-14 Multicultural books for children (especially Latinx books) Stories based on fascinating mythology Your next favorite fantasy series for girls ages 9-12 "Debut author Aster takes inspiration from Colombian folklore to craft a rousing series opener that's both fast-paced and thrilling. As her protagonists face off against a host of horrors, they learn the value of friendship and explore the possibility of changing one's fate in a world where destiny is predetermined."—Publishers Weekly, STARRED review "Worthy of every magical ounce."—Kirkus Reviews, STARRED review

Curse of the Night Witch

An #ownvoices fast-paced series starter steeped in Colombian mythology and full of adventure, perfect for fans of Aru Shah and the End of Time and Percy Jackson

Curse of the Forgotten City

The second book in a fast-paced series steeped in Colombian mythology and full of adventure, perfect for fans of Aru Shah and the End of Time and Percy Jackson.

Create the next very hungry caterpillar, big red dog, or cat in the hat with a hand from this trusted guide In Writing Children’s Books For Dummies, you’ll

Following a disastrous attempt to 'recruit' the witch, Vavara, a Russian oligarch turns his sights on Peter Grant and Thomas Nightingale – two of London's fin

Holly Cathers' world shatters when her parents are killed in a terrible accident. Wrenched from her home in San Francisco, she is sent to Seattle to live with h

Pip and the Wood Witch Curse

The great walled city of Hangman's Hollow is at war with the forest outside. Into this war, one dreadful winter's night, fate delivers a skinny, helpless boy. B

A Curse of Ash and Embers

A dead witch. A bitter curse. A battle of magic. Some people knit socks by the fire at night. Gyssha Blackbone made monsters. But the old witch is dead now, and

The first three volumes of the internationally bestselling Last Apprentice series! Thomas Ward is the seventh son of a seventh son. He is destined to battle the

The Blood Maker and the Witch's Curse

A shadowy witch, a cursed hunter—it's tricky business for Sol and Connie as they face off against this awful pair. The kids narrowly averted being eaten by th